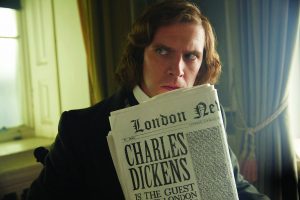 The Man Who Invented Christmas — The man in question is Charles Dickens, played by Dan Stevens in this adaptation of Les Standiford’s 2008 nonfiction book. Standiford’s thesis is that by writing his “Ghost-Story of Christmas” A Christmas Carol in 1843, Dickens helped to bring the holiday, which had fallen somewhat into disuse
in Britain, to something of the social importance it now holds, and particularly to its association with charity and
liberality.

If this is true, then I think we can forgive him for the long-term downside of this. It’s doubtful that Dickens, with
his genial vision of helping the needy and partying with family and friends, could have foreseen Black Friday riots
and holiday depression.

This is a fascinating story, but while the movie, adapted by Susan Coyne and directed by Bharat Nalluri, is watchable and amusing enough, it seems to me to have been dramatized in the most conventional and heavy-handed way. Like Shakespeare in Love, the film depicts literary inspiration as a direct line from what an author witnesses or overhears on the street to what he immediately runs home and scribbles into his work. But while Shakespeare in Love made a borderline-campy joke of this idea, The Man Who Invented Christmas suggests that it’s getting at the Dickens psyche, as the author’s imagination conjures up Scrooge, Marley, Fezziwig and other figures, and gets heckled by them.

The film tries to generate suspense over whether Dickens will allow Scrooge his change of heart and spare Tiny Tim at the end of the story, and further tries to link the Scrooginess in the author’s own personality to his lifelong conflict with his big-talking, perennially broke father. Both of these ploys feel thin–it’s hardly likely that Dickens ever conceived of A Christmas Carol ending with Scrooge unrepentant.

Still, there is plenty of enjoyable acting here. Christopher Plummer, who lent his voice to Herod the Great in The Star, is such a natural as Scrooge that it seems odd he’s never played the part before. Stevens is exuberant as Dickens, and gets across some of the frustration that anyone who writes for a living feels at interruption. Justin Edwards is likable as the long-suffering Dickens pal John Forster, and it’s great to see vets like Miriam Margoyles as
a housekeeper and Simon Callow as the illustrator John Leech. The best performance, however, is by Jonathan
Pryce as the sweet, cadging fraud John Dickens, genuinely pained by his son’s shame over him, but not about to let it stop him from having a good time.

When his beloved, legendary partner dies, Roman lands at a hotshot criminal defense firm run by the slick Colin
Farrell. Farrell’s exasperated by his new associate, but too aware of his gifts, and maybe too conscience-haunted about his own lost idealism, to get rid of him. When one of Roman’s cases goes tragically wrong, he yields at long
last to the temptations of cynicism, and winds up in real trouble.

Writer-director Dan Gilroy is trying for a gripping legal drama in the vein of The Verdict. But while the story has its
interesting aspects, it’s too loosely structured and rambling to keep us on the edge of our seats, and Roman’s plight in the movie’s final quarter is unconvincingly dramatized.

While the film falls short as a thriller, however, it succeeds as a character study. Washington taps the prickly
side of his own persona to create this maddening and lovable nerd-warhorse, who decides, disastrously, to try
wealth and luxury on for size. If the plot were as vividly rendered as the title character and his moral lapse, Roman
J. Israel, Esq. could be a classic. As it is, it’s an interesting misfire.

The Man Who Invented Christmas is rated PG and Roman J. Israel, Esq. is rated PG-13. Both play at Tempe Marketplace, Chandler Fashion Center and other multiplexes Valleywide.