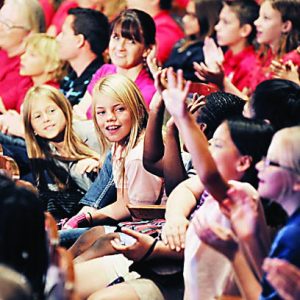 A member of Tempe’s performing-arts family has decided to leave the comforts of home.

Childsplay, a homegrown arts organization established here 40 years ago, will relocate most of its
productions to Herberger Theater Center in Phoenix in June 2019, when the group’s current contract expires at
Tempe Center for the Arts.

Arts classes, including summer day camps, will remain at Tempe’s city-owned Mitchell school, now known as the Sybil B. Harrington Campus for Imagination and Wonder. The group’s headquarters also will stay in Tempe.

According to Nikki Ripley, the city’s communication and media relations manager, the move is being made to help accommodate larger audiences for Childsplay’s child-friendly shows.

TCA has a 600-seat main theater; Herberger has an 800-seat center stage.

“This is bittersweet,” said Tempe Mayor Mark Mitchell, “but we understand Childsplay’s desire to try to grow into a bigger space. The city has proudly embraced Childsplay as a key contributor to the cultural life of Tempe and we wish them all the best,” said Mitchell.

How it started
In launching its Arts and Culture Plan in 2015, the city and a group of about 900 arts devotees envisioned
a continuing role for Childsplay in Tempe, emphasizing what they considered the importance of theater and arts opportunities for children.

At the same time, some planners wanted the city to diversify its performing-arts offerings at TCA to include more variety for adults, planning for which has been ongoing since the July 2016 hiring of Ralph Remington as TCA’s artistic director.

He said he looked forward to involving TCA in “new play development, by the newest, brightest playwrights in America, and choreographers, and musical groups.

“You want to have [these productions] overlap, so that it’s not just one after the other, but the dance companies get exposed to the plays.”

As an example of progress toward that goal, audiences were treated to a first-ever Disrupt FEST, including a play directed by Remington. And, with such initiatives continuing to move forward, Remington seems to have helped further propel TCA’s pursuit of audience diversification.

A youthful audience
During much of its time in Tempe, Childsplay became a nationally and internationally respected professional theater company whose chosen audience is children. The overarching premise, according to the organization, has been that young people deserve to experience challenging, thought-provoking theater of the highest artistic quality.

Said one of the group’s historical summaries:
“Our respect for children’s intelligence and creativity drives us to produce new and innovative works by theatre’s finest artists.”

That principle did not change through the decade that followed, and in fact was reinforced by evolutionary
changes occurring in Valley schools.

“Our understanding of the challenges facing Arizona’s classroom teachers leads us to offer arts education resources in 40 communities annually. In the past 36 years, we have educated and inspired more than 4 million young people and families. We have grown to serve an average annual audience of 200,000 students, teachers, and families.”

Today, performing in schools remains a core Childsplay activity, with three annual touring productions that visit hundreds of schools throughout Arizona.
It is estimated that one in five Arizona K-6 students will see a Childsplay production at their school. More than half of this audience lives at or below the poverty level.

By the numbers
As to financial arrangements involving Tempe’s sale of the former Harrington school to Childsplay in 2006, spokeswoman Ripley said Childsplay—10 years later, in 2016—proposed selling the city its interest in the campus improvements it had made for the depreciated value of those improvements.

The city agreed to pay Childsplay $1.9 million over five years and take back ownership of the property.

The city and Childsplay then entered into a 50-year use agreement for the property, with Childsplay paying to lease, maintain and make repairs at the campus over that time period.

“This community strongly values arts and culture, and the city of Tempe has always made these types of investments in quality of life,” Mitchell said.

“Our residents generously approved the 20-year arts tax in 2000 that made TCA possible. Our investments in Harrington School will continue to help develop the artistic spirit of our young people.”

This past May, the Tempe City Council agreed to explore continuing the one-tenth-of-a-cent sales tax for the arts beyond the levy’s current expiration in 2020. Councilmembers agreed to place the issue on a future ballot for voter approval.