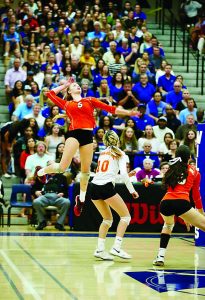 It felt like almost every ball was dropping on Xavier’s side of the net and Corona was on its way to repeat as 6A State Champions, after winning the first set 25-23 and leading by five points mid-way through the second set.

That was until Xavier rallied from behind to take the second set 26-24.

Winning that second set seemed to give Xavier’s volleyball team the boost of confidence they needed to get the momentum back on their side.

The Aztecs should be proud of their 41-3 season. They should also be proud that Corona made it into the state championship finals for the 10th time since the school was opened 40 years ago.

The Aztecs came very close to being bounced out of the playoffs in the semifinals. They survived to play in the finals with an amazing come-from-behind victory in the semifinals over Mountain Pointe, taking the final three sets (25-21, 25-16, 15-2) after losing the first two (23-25, 26-28).

The physical and mental energy expended in that semifinal win two days before the finals had to have been taxing on the Corona players once they lost the second set to Xavier in the finals.

Senior Brooke Nuneviller took the team on her back in that semifinal match against Mountain Pointe leading the Aztecs with an amazing 33 kills or 6.6 kills a set hitting .403. Plus, Nuneviller also had 20 digs and four block assists—three of them with sophomore Sadie McRae.

Setter Abby Meyer had 51 assists or 10.2 assists per set while sophomore libero Becca Morse, playing against her sister, Anna Morse from Mountain Pointe, had 25 digs.

Although it will be hard to replace seniors Nuneviller, Meyer, West, Wissinger, Allie Wade, Isis Mitchell, Lexie Vicek, and Baylee Leavitt in 2018, the Aztecs have some young players, such as Noble, McRae, Morse, Kaiessa Sounart, Kacie McCain and Celestial Miller who gained a lot of playing experience this season.

The Marcos de Niza volleyball team entered the 4A State Championship Volleyball Tournament as the No. 10 seed after going 7-1 in the Desert Sky section.

The Padres defeated No. 7 Greenway, 3-2, on Oct 31 to advance to the quarterfinals against No. 2 Cactus on Nov. 2. Marcos lost to Cactus 3-1 in that quarterfinal.

Several players standout now that the season is over for their offensive and defensive skills recorded on the stat sheets.

Junior Elyse Olson led the Padres in kills with 190 kills averaging over two kills a set while freshman Hailey White was next with 162 kills in only 74 sets or an average of 2.2 kills a set.

Junior Katie Johnson had 150 kills while junior Jenifer Lauer not only won points with her 122 kills but had a killer service game which helped her lead her team in service aces with 60.

Freshman Olivia Craig was next with 44 aces while Johnson had 43 service aces.

The team was able to earn over 130 points during the season when the front row players blocked their opponents attack. Leading the Padres in blocks was White with an impressive 36 solo blocks and 43 total blocks.

Lauer and Olivia Craig shared setting the ball with each recording over 300 assists or close to 3.5 assists per set while setting up attacks to earn points.

Playing libero, senior Justice Craig led the Padres in digs with close to 500 digs or an average of 5.3 digs a set or 15.3 digs a match and was one of the main players to receive serves with over 400 receptions.

Additional team members contributing to the Padres success on and off the court this season include seniors Daisy Salazar who had 33 digs in 19 sets and Yahselah Thompson.

The Padres, the only Tempe high school team to qualify to play in the football playoffs, lost in the first round of the 2017 AIA Football 4A State Championship playoffs Nov. 3 to Cactus Shadows High School, 34-7.

Marcos de Niza finished the season ranked No. 12 in the 4A division with a 5-6 record.

Senior quarterback Marcos Moreno finished the season averaging close to 150 yards passing per game to a number of receivers including leading receiver, Joren Davis, who averaged over 50 yards per game followed by juniors Anthony Steinpreis and Arthur Morgan

Gastelum, who contributed to the Padres success on both sides of the ball, was the leading tackler registering over eight tackles a game. The next closest was senior Joe Chavez with over seven tackles per game.

Corona’s badminton team, who finished the regular season ranked No. 5 in Division I, defeated No. 12 Central, 5-1, in the first round of the 2017 AIA Badminton Division I State Championship playoffs held Oct. 23.

In the quarterfinals, the Aztecs were defeated by Xavier, 5-1.

In the individual portion of the state playoffs, Corona had one player qualify in the singles tournament and two sets of doubles players in the doubles tournament.

Brennan Agnew entered the singles tournament, Oct. 20, ranked No. 6. In the first round, she defeated a player from Highland High School, 11-3, 5-11, 11-6 and a Red Mountain player, 11-4 and 11-6, in the second round before meeting her first ranked opponent in the quarterfinals.

Agnew went on to defeat No. 3 ranked Gabrielle Nakada from Desert Vista, 13-12, 11-0, before facing off against No. 7 ranked Julia Mumme from Perry in the semifinals.

Agnew ultimately lost to Mumme, but it took three sets. Mumme went on to play against her teammate Jillian Lagasca in the finals while Agnew defeated No. 5 ranked Abby Mann from Red Mountain the Consolation Final.

Representing Corona in the Doubles State Championship were No. 6 ranked Katie Carroll and Eileen Li and unranked Kristie Hale and Cameron Adams.

Carroll and Li, as the No. 6 ranked team, had an unexpected match in the second round when they faced off against an unranked doubles team from Perry, Megan Crow and Kylie Goldberg.

Crow and Goldberg, not only defeated Carroll and Li, 15-7, 15-7, in the second round but went on to defeat their own Perry teammates, No. 1 ranked Pierson and Read, in the finals to win the doubles championship.

Corona’s boys golf team qualified for state this year where they finished 10th out of 15 Division I schools who participated in the state golf tournament held at Omni Tucson National Golf Course Oct. 30-31.

Zachary Erskine bounced back the second day to shoot a 72 after finishing with 80 the first day of the tournament. Erskine finished the tournament as the top Aztec golfer with a total of 153. He finished 35th out of 97 golfers.

Davis Cottrell finished tied for 47th, four strokes back from Erskine with a total of 157.

Hannah McGraw was the top golfer for Corona at the Division I State Golf Tournament held at Tucson National Golf Course Oct. 30-31.

McGraw who had trouble the first day of the tournament, shooting only 85, rallied on the second day to shoot 78 for a total of 163 or 19 over par to take 28th place out of 92 Division I golfers.

Teammate Lexie Baughman had a pretty good round the first day shooting 82 but had problems the next day finishing the round with 96 and the overall tournament in 45th position.

Erika Johanson was the last Corona golfer to play both days. She took 72nd place.

Caroline Formisano, Elle Potts and Sarah Butler did not play both days.

Corona finished in 11th place out of 15 Division I schools who qualified golfers for the state playoffs.