It’s going to be hard to fill the basketball shoes and score the points typically made by Alex Barcello and Sabin Lee, Corona’s star players who both will be heading off to play Division I college basketball this fall: Barcello at the University of Arizona and Lee at Vanderbilt.

Lee and Barcello, both named to azcentral’s All-Arizona team their senior season, were terrific guards and prolific scorers for the Aztecs.

Lee, who had to sit out the second half of the season his sophomore year due to injury, came on strong his junior and senior seasons averaging over 20 points a game for the Aztecs with his speed and high-flying athletic dunks.

Barcello, who played on the varsity team all four years, scored 2,254 career points at Corona shooting over 55 percent from the field and almost 90 percent from the charity stripe his senior season.

During Barcello’s storied high school career, he not only was named Gatorade Arizona Boys Basketball Player of the Year his sophomore and senior year but left a legacy that will be hard to follow when he broke and exceeded the school’s career-point record set by Lamont Long 20 years ago.

Long who averaged 33 points a game his junior year and 28 points a game his senior season set Corona’s career points record with 2,118 points 20 years ago before heading off to play at the University of New Mexico.

The current Aztec basketball team spent the summer working on individual skill development in the hopes of filling some, if not all, of the void that will surely be felt with Barcello and Lee’s absence when basketball practice starts in Nov.

“Summer, for us, is about giving our guys an opportunity to focus on addressing individual weaknesses on both sides of the ball without risk,” said head coach Neil MacDonald. “We don’t spend much time on team concepts, except for defense, during the summer.”

The coaches did spend time with the players this summer, especially with any new players, on the basketball program culture at Corona.

“We spent a lot of time working to maintain the healthy culture that has made CDS successful over the years,” said MacDonald. “We believe this group of young players understands the importance of that culture.”

Keeping with the summer goal of individual skill development, the team did participate in two non-traditional tournaments where the pressure of wins and losses was not the focus.

“We played two weekends, one at Gilbert High and one at Campo Verde, where we played four games each weekend,” said MacDonald. “The organizers of these non-traditional tournaments just look to make competitive matchups where there are no winners or losers.”

These non-traditional tournaments not only gave the coaches an opportunity to identify areas that each player may need to work on, it also allowed players to showcase their improved skills on offense. 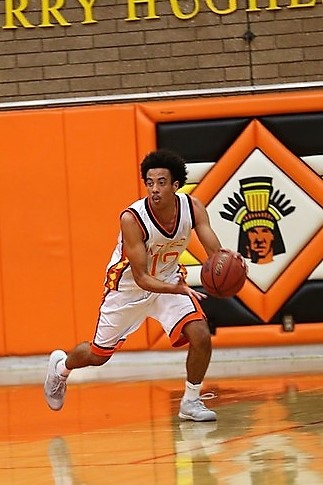 “We had different players stand out at different times as far as offense goes,” said MacDonald. “Our scoring was pretty balanced in the tournaments but we had good performance inside from juniors Keb Summers and Jaron Reval and senior Miles Allen.”

“We had good perimeter work and scoring from sophomores Eric Blackwell and Dalen Terry along with junior Sha Vere Yarde.”

“When it came to playing defense during the tournament games, seniors Kobee Marion and Hale Samuelson added defensive toughness as did sophomores Derek Zarate and Jaron Reval,” said MacDonald.

The big question may be what players can the fans expect to take over the guard play of Barcello and Lee especially as it related to the point guard position.

It may end up falling to Blackwell and Terry, both guards, who gained valuable experience last year playing as freshman on the varsity team with Barcello and Lee.

“We are expecting more from our returning guards plus there will be plenty of opportunities for guys to step in and fill those minutes played in the past by Barcello and Lee,” said MacDonald. “Filling their shoes will be a group effort, at least in the beginning.”

To finish off the summer break, the Aztecs held informal scrimmages with Perry, Millennium and Tempe High but did not attend any summer team camps.

“Overall, we were very happy with our skill development this summer,” said MacDonald. “We got to work with some new faces from our 17-1 record JV team last season.”

“We are confident that we will be putting a very competitive group on the floor this upcoming season.”

Corona basketball fans will be able to watch former Aztec and Oregon basketball player Casey Benson play his senior season at Grand Canyon University after he announced after the NCAA tournament that he was transferring from Oregon.

Benson, who graduated from Oregon in three years, will be eligible to play right away under head coach Dan Majerle.

Benson, who played a major role in the first three of Corona’s four consecutive state championships will also be playing under his brother, T.J., an assistant coach for the Antelopes.

While at Corona, Benson was name Player of the Year his junior season. He often appears to personally will his team to win games, especially in the state tournament when he took over games scoring one big three after another.

He set a new career assist record at Corona after recording 444 assists.

Another athlete who played basketball at Corona and was part of all four of Corona’s basketball championships, Cassius Peat, has landed at Scottsdale Community College.

Peat, a two-sport athlete playing both football and basketball at Corona, has been on a recruitment rollercoaster of sorts since graduating from Corona in 2015.

Cassius, who chose football to play in college like his father, Todd, Sr. and two older brothers, Todd, Jr. and Andrus, has a recruitment history with two major college programs: UCLA and Michigan.

While in high school, he first verbally committed to UCLA to play defensive lineman for the Bruins only to change his mind after going on a recruitment trip to Michigan State.

Peat withdrew his commitment to UCLA and signed with Michigan State.

After redshirting his freshman year with the Spartans, Cassius left Michigan State before the 2016 season for undisclosed personal reasons.

He ended up at Pima Community College enrolled as a student. He worked out with a trainer but did not play football.

Last winter he recommitted to UCLA to play defensive lineman starting in the fall of 2017.

That was before Michigan State and head coach Mark Dantonio asked him to return to the Spartans.

He once again shunned UCLA for Michigan State but was informed just before he was to leave Tempe for East Lansing not to come.

Peat was hopeful after being told not to return to Michigan State that he could land another D1 scholarship but he ran into a series of roadblocks that made it necessary to accept the offer at Scottsdale Community College if he wanted to play football this fall.

The good news is that he will be able to play football this fall offering him the opportunity to not only show off his football skills but have an impact on the football field playing in front of his family and friends.

Peat should also be able to finish his Associate Arts degree and be eligible to transfer to a D1 school for the spring semester or at the least during the summer.

He will still have two full years of D1 eligibility left to play football.

The Artichokes play their first game Sept. 2 at Glendale Community College and then play at home Sept. 9 against Phoenix College.