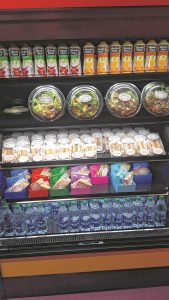 It was 2007, nearly 10 years since Ward Walston had started awakening virtually every morning to confront another day, another construction site, another excruciating battle with the aches and pains that had grown progressively worse as the months and years wore on.

It was time, he told his wife Leslie, to find a new line of work to support the family of four, now including two young sons needing a dad who was physically healthy, not increasingly immobilized by a compromised body.

So the pair talked about a new career for Ward and the possibility of moving from their home in the confines of tiny Salmon, Idaho, to a place with more job diversity, more potential, more opportunity to build their own version of the American Dream.

That’s when the notion of opening a small, family-owned business became a topic of discussion, among many others, and the search was underway.

A friend had applied for a Great Harvest Bakery franchise in Idaho and had found the venture both successful and rewarding, so the Walstons figured a call to Great Harvest’s corporate offices in Dillon, Montana, population 4,100, would be in order.

The negotiations that followed led to the couple’s opening a Great Harvest satellite bakery in the upscale Countryside Specialty Shops complex on the northwest corner of Warner Road and McClintock Drive in Tempe.

Now, eight years into their enterprise, the Walstons have developed a cadre of customers who believe in, and go out of their way to support, the idea of healthy, fresh, affordable (did we mention delicious?) bread, rolls and pastries. Other franchises have come and gone, but none with the same quality products, friendly staff and family roots on which the Walstons have managed to build an enthusiastic and loyal following.

So it was no surprise when a couple of marketing department officials who oversee Legoland—the showcase for a 21st Century remake of the wooden toys that originated in Denmark in 1932—asked the Walstons to stock their newest Arizona Mills location with a steady supply of home-baked sandwiches and snacks, all freshly made, all freshly delivered.

Still in the opening weeks of the west Tempe shopping-center location, the Walstons are providing an assortment of Cobb, turkey and swiss, grilled cheese and other sandwiches, plus assorted snacks. Each order, broken down more or less equally between child and adult varieties, amounts to about 250 sandwiches, which the Walstons’ son George dutifully delivers around 9 a.m. in specially packed coolers to ensure predictable quality.

Once delivered, the meals are packed into special Lego lunchboxes and placed in refrigerated cases to await the arrival of the hordes of hungry customers.

While the added business hasn’t yet necessitated an increase in the bakery’s staffing, it has provided yet one more reason for the senior Walston to make sure he’s on the job every day except Sunday by 2 a.m.

Again, though, the business’ growth seems to have progressed just fine, thank you, the big Legoland order simply providing, you might say, frosting on the cake.

“Our customers, many of them winter visitors who are familiar with Great Harvest bakeries in other parts of the country, come from as far as Apache Junction, Sun City and Tucson because we’re the only Great Harvest store in Arizona,” says Walston.

Except, of course, until the bustling Lego wonderland opened its doors at Arizona Mills.

Don Kirkland
Don Kirkland realized in elementary school that his future would revolve around the written word. His first newspaper job was with a small L.A.-area daily whose publisher demanded the kind of journalistic integrity that ultimately led him to be the admired press director for both a governor and a U.S. President. Don later was employed by Times-Mirror Corp. and, in Arizona, was executive editor of the Mesa Tribune after its purchase by a major East Coast chain. He founded Wrangler News 30 years ago and has dedicated his work to preserving the vital role of community newspapers.
Previous articleNew Chandler chief exec sees fiscal strength, planning, as pathway to opportunity
Next articleNational concept’s move to Tempe sparks new interest in music