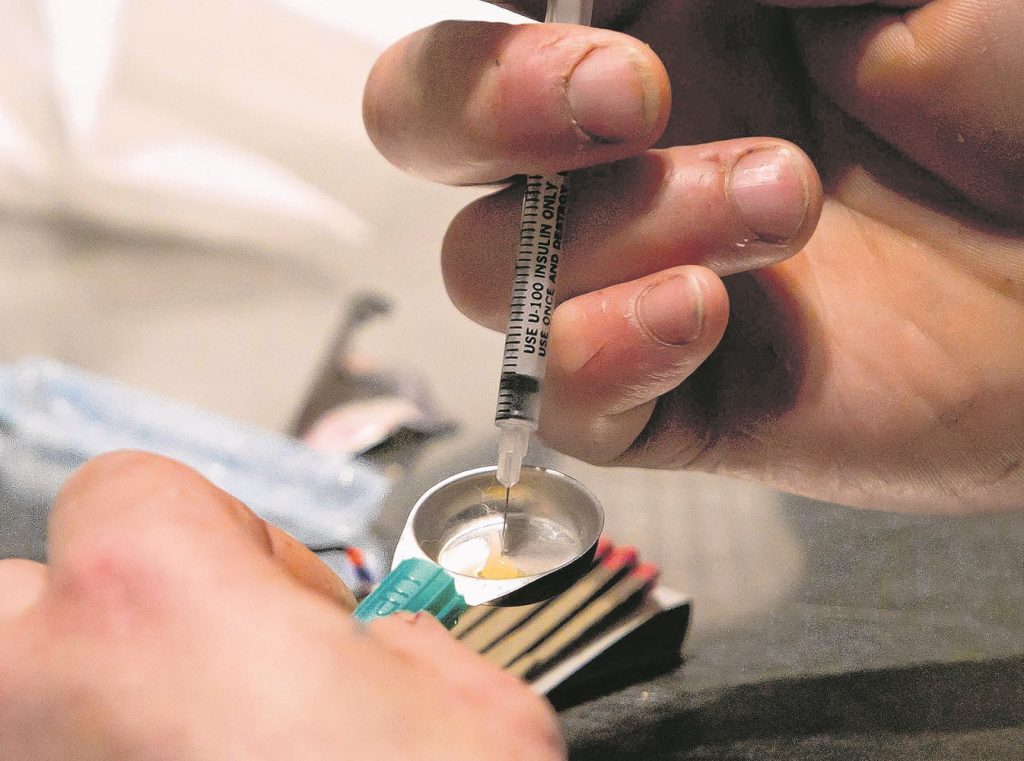 Tempe is like many college towns: a sprawling campus, lively nightlife and a network of bike lanes. But there’s something else going on here too, something that often goes unseen. Not far from the center of town stands Tempe St. Luke’s Hospital, a community facility that’s been serving the area for 60 years.

Last year, Tempe St. Luke’s had the state’s fourth-highest number of admissions for heroin overdoses. The most recent statistics from the Centers for Disease Control indicate heroin use in the U.S. has jumped 90 percent from 2002-2013.

“What we’re doing is projecting an image,” Coffey said. “We don’t want the people who are using heroin to look much like us.”

Many addicts, Coffey said, start out on prescription opiates like OxyContin. That includes teenagers swiping pills from their parents’ medicine cabinet and adults who were prescribed the drugs and then got hooked. Once their doctor won’t prescribe anymore, they transition to heroin.

He recalled a woman he described as a “PTA mom” who became a heroin addict after a back injury that led to an addiction to prescription painkillers. Eventually she graduated to heroin, but never saw herself as “one of those people.”

“Part of the issue in treating her was that she could not see that she had a problem,” Coffey said. St. Luke’s keeps recovery groups mixed, he said, with blue collar laborers sitting beside professionals. “People need to see that.”

“In the Tempe area, in Guadalupe, it’s a matter of a few minutes and you can find some heroin,” Coffey said.

Paul, a Tempe man in recovery for heroin addiction, said he began using the drug at 19, launching a decade-long ordeal, becoming homeless at one point and landing in jail on numerous occasions. He was in and out of area hospitals for years to treat overdoses and the infections that result from dirty needles pushing through dirty skin. At one point, he almost lost his arm to an abscess.

“I didn’t ever want to be sober. Drugs gave me the relief and made my life bearable,” Paul said. It was a life that revolved around the quest to get his next fix. You can buy a hit for three bucks on street, he said, but in the throes of addiction, he needed more than $100 a day to maintain his habit.

“I’d get up every day and go around the Valley or wherever I was living and try to steal stuff … whatever I could for money basically just to get drugs, to get heroin.”

In his early twenties, his parents tried relocating the family, hoping a fresh start would break the cycle. Chicago, Florida, Michigan and Texas all ended the same way. He’d lost his freedom to a dark enemy.

“I got of jail again and within a couple months I was back doing the exact same thing: stealing from my family, lying, cheating everyone around me. One day I got up and there was a note that said “Be out by tonight.”

Crushed by a sense of hopelessness and despair, he decided he couldn’t live like that anymore. He called his parents who had rescued him on countless other occasions.

“Basically, they told me there was nothing they could do for me,” Paul said. He went through detox and then was introduced to a 12-step program. For years, he attended meetings daily but said he now goes once or twice a week. He sponsors others and his roommates are all in recovery too.

“I have real friendships now where we don’t try to use each other for stuff and I’ve been able to rekindle all the relationships with my family again.” He’s been clean now for five years and said it’s the simple things in life that give him joy: hanging out with his dog or visiting his parents’ house on Sundays, bringing a box of doughnuts for his nieces and nephews.

“I have a life that’s worth living today.”

Two months ago, however, there was a tragic reminder that recovery is an ongoing battle: he came home and found his roommate dead from an overdose. Relapse can be a killer and it’s something Coffey says St. Luke’s program anticipates. They don’t tell patients that if they relapse, they’re out of luck.

“We recognize that part of the addiction process is that they’ll potentially have two or three relapses. At the end of treatment, we have a plan in place to manage relapse. What we find is that the longer we can keep them off, they have a greater chance of not relapsing.”

Although he doesn’t have children of his own, Paul offered some advice to parents with drug-addicted kids.

“Never give up hope.”

At the same time, he recognizes that family members can unwittingly facilitate addiction.

“For years, my parents and my family, if I did anything, they’d just come help me and save me.” Addicts, he said, have to suffer the consequences of their behavior. “That’s the hard part, wanting to help your kid and at the same time, there’s nothing you can do to help them.”

“I just want people to know that there is recovery possible. There is a different way of life.”