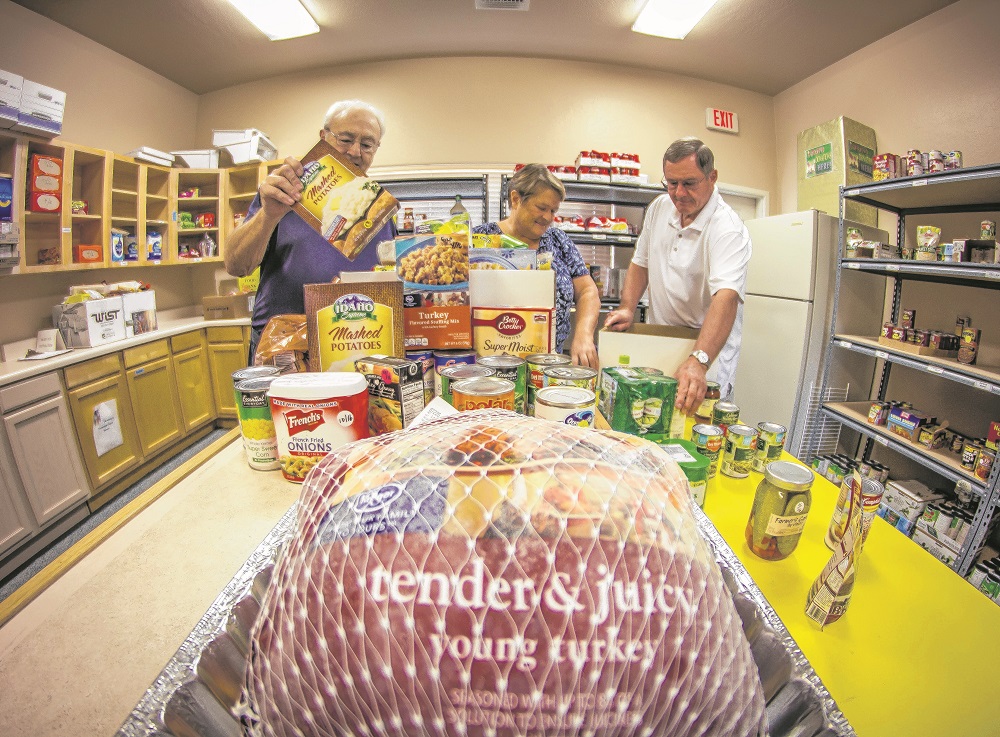 It was the late 1990s, and for 14 long months Karen Goetz spent sleepless nights aplenty. Her husband’s employer, a reputable northern California company, had gone through some agonizing cutbacks. Suddenly, the family’s years of enjoying a carefree lifestyle while raising two sons came to a sudden and worrysome end.

“In the beginning, it wasn’t a big concern,” recalls Goetz. “We thought you just put out your resume and you’d have another job.”

But the weeks stretched into months, and the pair began to wonder if they were going to lose their home.

That’s when friends, neighbors and relatives stepped in to help, filling the gap until another job—and restored hope for the future—finally materialized.

While the worries of those days still occasionally cross her mind, her more important memory is of a community that so willingly was able to mobilize to help a family in need.

This experience, and her recognition of the dramatic impact it had on her life, has come to be one of the mostly unspoken reasons that Goetz has gained special—and in this case, spiritual—appreciation for the small food-bank program conducted regularly by Arizona Community Church.

There, as a longtime staff member, Goetz oversees the otherwise volunteer workforce that restocks shelves and fills the baskets that are distributed to families throughout the year.

“The church has been doing this for a long, long time,” she says, unfolding the history of the south Tempe institution and how it has quietly maintained a stockpile of emergency provisions for more than 17 years.

While only 30 or so families can be accommodated during any given period, Goetz says it fills a need for local families, especially during the holidays.

There are other, much larger organizations that provide year round for those down on their luck—St. Mary’s Food Bank, Chandler Community Christian Center among them, Goetz notes. But Arizona Community Church fills a special niche of the neediest whose situation has been discovered by church members.

Some are on the brink of homelessness, others are temporarily low on funds as a result of illness or—again, bringing back her own memories—of being out of a job longer than expected.

“We try to go on referrals from people we know; we say ‘send that family in’ and we’ll give them a Thanksgiving dinner,” says Goetz.

The gesture represents more than an economic blessing, she adds. “There are a lot of people who aren’t accustomed to being in need; they can be embarrassed by the situation and reluctant to go through the standard channels for help.”

As a result of the church’s program that relies largely on referrals from its members, staff and others who have regular contact, Goetz says some who are considered for aid via a non-judgmental “friend” seem more willing to make their situation known and accept temporary intervention.

“If someone we know makes a referral, a lot of times the person they’re telling us about doesn’t mind coming to us. We try to make it so there’s a known connection, and there are no strings attached. We’re just glad to be able to do it,” Goetz says.

As to some of the situations Goetz remembers best, she especially recalls the case of a woman who was caring for seven grandchildren, disenfranchised from their parents because one was in prison, the other unable to provide a home.

“She had all these mouths to feed, and she was a good woman,” Goetz recalls. “We feel bad for her; she’s done the best she can. We try to make sure she gets a turkey, especially at Thanksgiving time.”

Don Kirkland
Don Kirkland realized in elementary school that his future would revolve around the written word. His first newspaper job was with a small L.A.-area daily whose publisher demanded the kind of journalistic integrity that ultimately led him to be the admired press director for both a governor and a U.S. President. Don later was employed by Times-Mirror Corp. and, in Arizona, was executive editor of the Mesa Tribune after its purchase by a major East Coast chain. He founded Wrangler News 30 years ago and has dedicated his work to preserving the vital role of community newspapers.
Previous articleNew ‘Row’ project promises a more vibrant downtown
Next articleSports Notebook