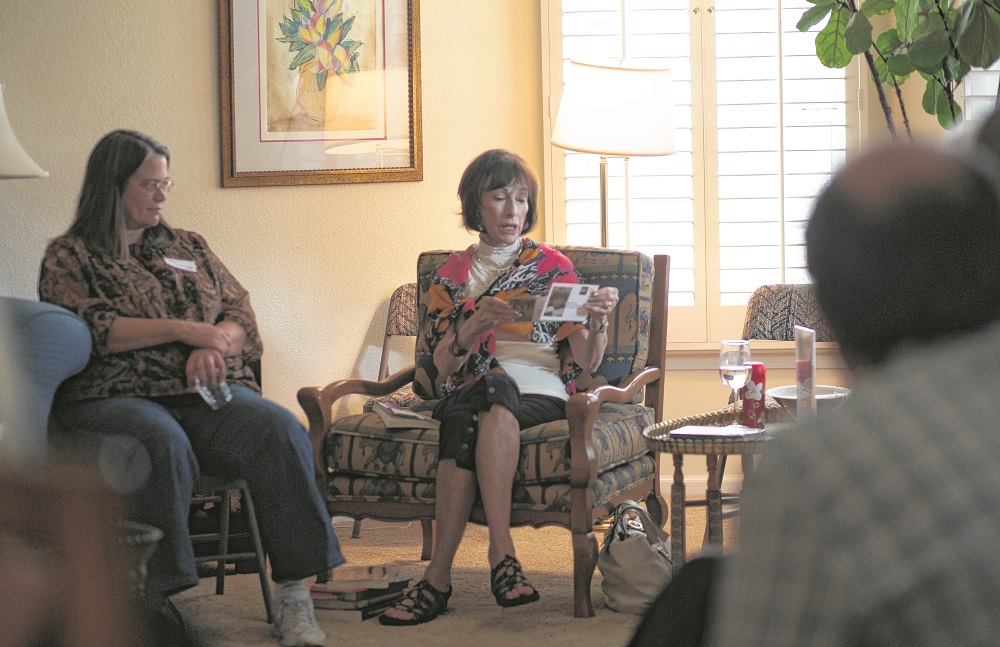 Some journeys are a single step. Others take thousands. Marcia Fine, author of “The Blind Eye: A Sephardic Journey” and winner of the Adult Category of 2015 OneBookAZ, began her own journey in Miami, Florida. Moving to Phoenix, she completed her master’s degree at Arizona State University where she taught Freshman English, then opened the successful L’Image Model and Talent Agency.

But she had stories to tell. After a series of satirical novels, she discovered her path led back to her family history. She wrote “Paper Children: An Immigrant’s Legacy,” based on letters from her Polish grandmother who forged a life in post-Holocaust New York City. The book has been a finalist for three national prizes.

That story led to a longer journey, this time to Spain and Portugal. Studying the Spanish Inquisition and realizing its importance within her narratives, she visited the Iberian Peninsula, explored the seaports and the ocean where so many Sephardic Jews had sailed for the New World. She visited synagogues and spent time in libraries, studying old manuscripts and documents.

Her research resulted in “The Blind Eye: A Sephardic Journey.” The novel interweaves the story of a family expelled from Spain during the Inquisition because of their faith with a parallel story of a contemporary Cuban-American woman searching for her Sephardic identity.

“It’s about people who were forced to convert and how they survived by living duplicitous lives,” said Fine. “Even though early action of the novel takes place during the 15th and 16th centuries, it’s relevant today, because immigration and intolerance are current topics.”

Her latest novel, released in April, is called “Paris Lamb.” Set in Paris and New York against the background of an international art auction, it explores the impact of an archeological find–a biblical treasure—in the midst of anti-Semitism.

Currently she is working on a book about the conversos, the Sephardim in South America and Mexico who converted under pressure during the Inquisition. “Many of them continued their religious practices in secret,” she said. “For example, they would light candles at sundown on Friday behind closed doors, being careful that a housemaid or visitor didn’t give them away.”

“If the household was in mourning, the mirrors were covered with a black cloth so the mourners would concentrate on the inner essence, not the external appearance, of the departed. They also swept dust and debris to the center of the room before picking it up, believing it was sacrilegious to sweep dirt past the mezuza, the sacred talisman on the door post. They had to be careful, though, that their household habits didn’t betray them to an informant.”

She continued, “They had special identifications, too. Instead of a secret handshake, a peacock feather decorating a lapel or a fan would signify a Sephardic Jew. Or strawberries embroidered on clothing or crafted into a jeweled brooch. And I recently saw a necklace of butterflies. When you squeezed it together, it formed a Star of David.”

ine’s new book is called, “The Hidden Ones,” and research has taken her to San Miguel de Allende, Mexico. Touring the city, she found an old Inquisition prison. Local residents told her that they hear moans and wailing at night, ghostly reminders of the building’s sinister past.

“I knew there were Inquisition outposts throughout South and Central America, up into Mexico, with the main Inquisition Palaces in Lima, Peru; Cartagena, Colombia; and Mexico City. But seeing this jail, with its altar tile set as a corner stone, imprinted with the royal seal and insignia of the Inquisition…it gave me shivers,” she said. “But that’s what it’s all about. It’s the passion of writing a story. It’s a journey, and you have to find your roots. You have to tell your own story.”

OneBookAZ is sponsored by the Arizona State Library Archives and Public Records, a division of the Secretary of State, with the purpose of bringing people together through literature by suggesting communities read the same books and participate in discussions led by the winners. The winning publications, including Fine’s“The Blind Eye: A Sephardic Journey”;“Welcome to Harmony,” by Dan Trumpis, the Teen Category Winner; and Bruce and the Road to Courage,” by Gale Leach, Kids Category Winner. will be available for free download until June 1, 2015, at www.onbookaz.org.