The joys, tribulations and challenges of the big move from high school to college

The transition from high school to college can be daunting, but for two recent Corona del Sol High School graduates, it’s been joy-filled. Chloe Lee Jones and Victoria Schyberg are in the midst of their first semester at Arizona State University in Tempe.

Jones, who is majoring in philosophy, said that so far the best experience has been attending the university’s welcome concert and being part of a sorority.

Like many new students, Jones worried she might not make friends or do well in school, but that hasn’t been the case at all. Most mornings, she wakes up at 9 and heads to class. Afterward, she works out at the gym in her dorm and spends time with her roommate. She’s also been getting up early twice a week to go running in order to train for a half-marathon that takes place in January.

The biggest difference between high school and college, Jones noted, was the work load. The classes are challenging, and she said she hits the books in the dorm’s study room in order to minimize distraction. “I need it to be quiet and I put my phone face down on the other side of the table so I don’t get distracted,” Jones said. 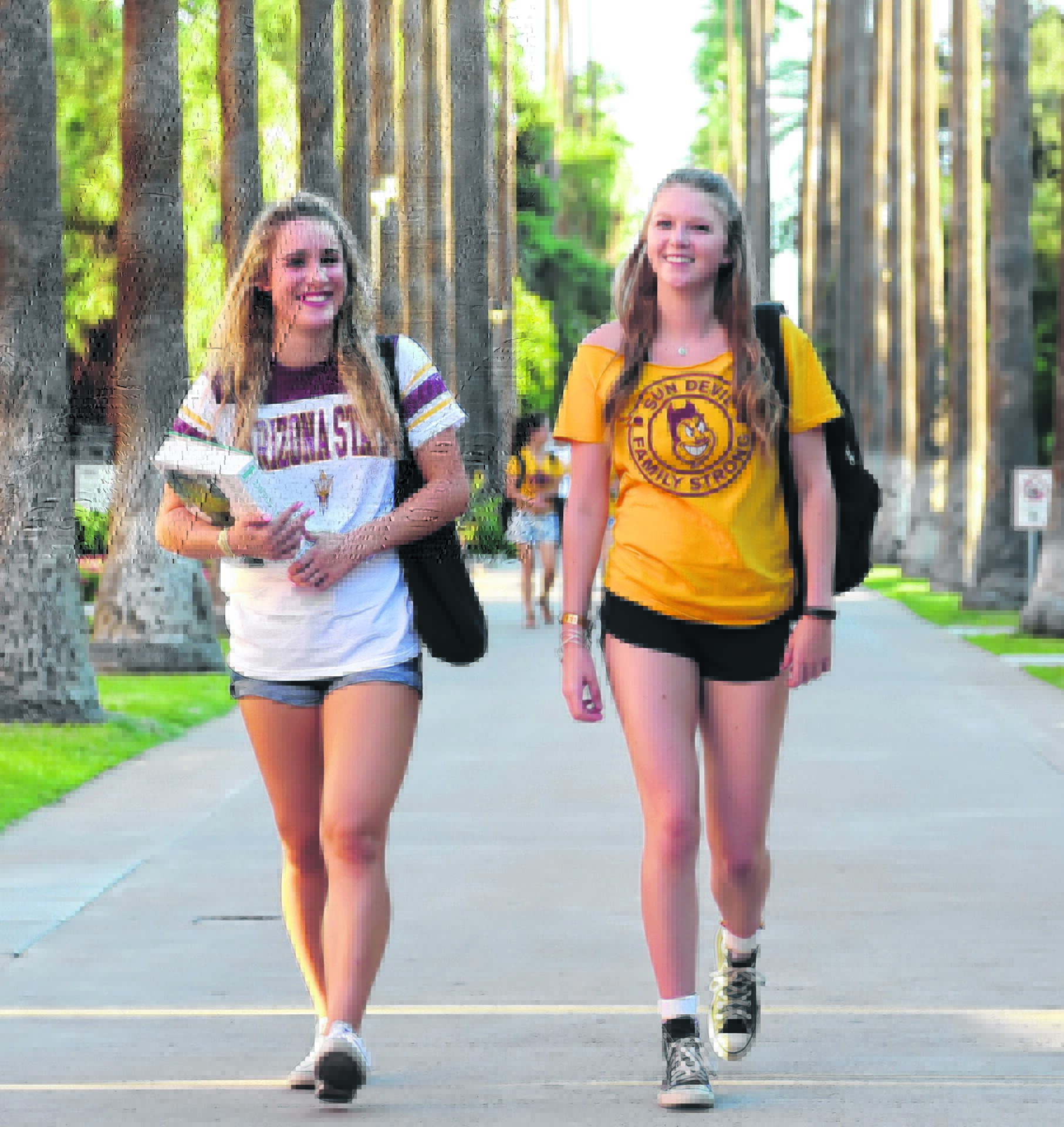 And while she enjoyed the first ASU football game and her sorority’s social events, she’s learned there are some things you just can’t have in a dorm room.

“I miss the home-cooked meals and my dog,” Jones said.

She’s majoring in philosophy, so that could be a stepping stone for a career in law or business, but Jones said she she’s hoping she could work one day as a marriage and family therapist.

“I believe that a background in philosophy will help me achieve this by helping me think of things in new ways and using my logic so that I can view situations from multiple points of view.”

Schyberg is majoring in broadcast journalism and communications with a minor in public relations. She said her best experience so far at ASU was attending the first home football game.

“It was so exciting and the energy there was wild!” Schyberg said. A former basketball player, she said her favorite college sports team is ASU’s women’s basketball team.

While some students complain about living in the dorm, Schyberg seems to be enjoying it.

“The weirdest but best part is that living the dorms with a roommate is like having a sleepover every night with your best friend,” she said.

Like Jones, Schyberg misses not seeing her family and her dog every day. She said she chose ASU because of its proximity to home and because of its Walter Cronkite School of Journalism and Mass Communication. The school is nationally recognized and she said he hopes a degree from Cronkite will help her land a good job after graduation.

Both Jones and Schyberg regard the construction taking place at ASU as a positive.

“The growth and construction is awesome,” Shyberg said. “I love that ASU spends its money on improving ASU for staff and students.”

“I think it’s amazing,” Jones said. “I did not know the campus was so big until I got here. There are so many helpful resources and so many convenient restaurants and school supplies stores.”

At the same time, Jones said, the campus is smaller than it seems. “My farthest walk is a simple 15 minutes,” she said.

Schyberg offered an alternate perspective. Back on her first day of high school at Corona, the campus seemed huge. Now, at ASU, she sometimes has classes a mile apart from each other.

Bucket List: scuba diving on the Great Barrier Reef; finishing a half-marathon; have a beautiful family

One thing she wishes she could change about ASU: the heat in the summer

Bucket List: whitewash the A, sit front row at a football game and find a club she’s passionate about

One thing she wishes she could change about ASU: expansion of the walk-only zones