When the leader of the world’s 1.2 billion Catholics touched down in Philadelphia Sept. 26, a large contingent West Chandler residents counted among the joyous throng that greeted him.

It was because of this link to the Wrangler News community that I was assigned to cover the visit and spend time with the group.

For most of the St. Andrew the Apostle parishioners, it was the first time they’d ever seen a pope. And while wall-to-wall television network coverage showed the massive crowd that pressed into the Benjamin Franklin parkway, there was nothing quite like actually being there among the more than 1 million people hoping to catch a glimpse of the man who seems to have captured the world’s imagination.

So what was it like to actually be with Pope Francis?

“Electrifying,” John Scheidt said. A parishioner of St. Andrew since its founding in 1985, Scheidt was in Philadelphia with his two sisters as part of a larger group from the East Valley. They’d spent the week touring the historic city, its buildings and lamp posts festooned with colorful banners welcoming Pope Francis and the World Meeting of Families.

The smiling pontiff’s countenance was emblazoned on banners that proclaimed some of his more popular sayings, such as “Love is the Measure of Faith” or “Have the Courage to be Happy.”

Scheidt and his sisters waited hours in order to hear the pope speak at Independence Hall, where the Second Continental Congress met in 1776 and penned the Declaration of Independence.

“We got there at one o’clock so we waited about six hours,” Scheidt said. “It was worth it. You don’t get an opportunity like that very often.”

The Scheidts, along with a band of St. Andrew parishioners, stood along thousands of others as the wind kicked up and the temperature dropped. Finally, the pope arrived at Independence Hall to give his rousing speech.

“It was inspiring,” Scheidt said. “He stressed the uniqueness of America and the freedom of people to express themselves.”

Timothy and Susan Gibson didn’t make it to Independence Hall, but they managed to get into the Festival of Families, an all-day outdoor affair that included musical appearances by Aretha Franklin and one-time Valley resident Matt Maher, who has risen to prominence as a contemporary Christian artist.

Near the end of the evening, Pope Francis addressed the crowd about the role of families as “schools of love.”

“It was an amazing experience. It was strength and warmth and joy all wrapped up,” Susan said. “Everyone was so friendly and upbeat.”

Timothy expressed similar sentiments. “We were very excited to see the pope. He has such a countenance about him. He seems to enjoy being with people.” 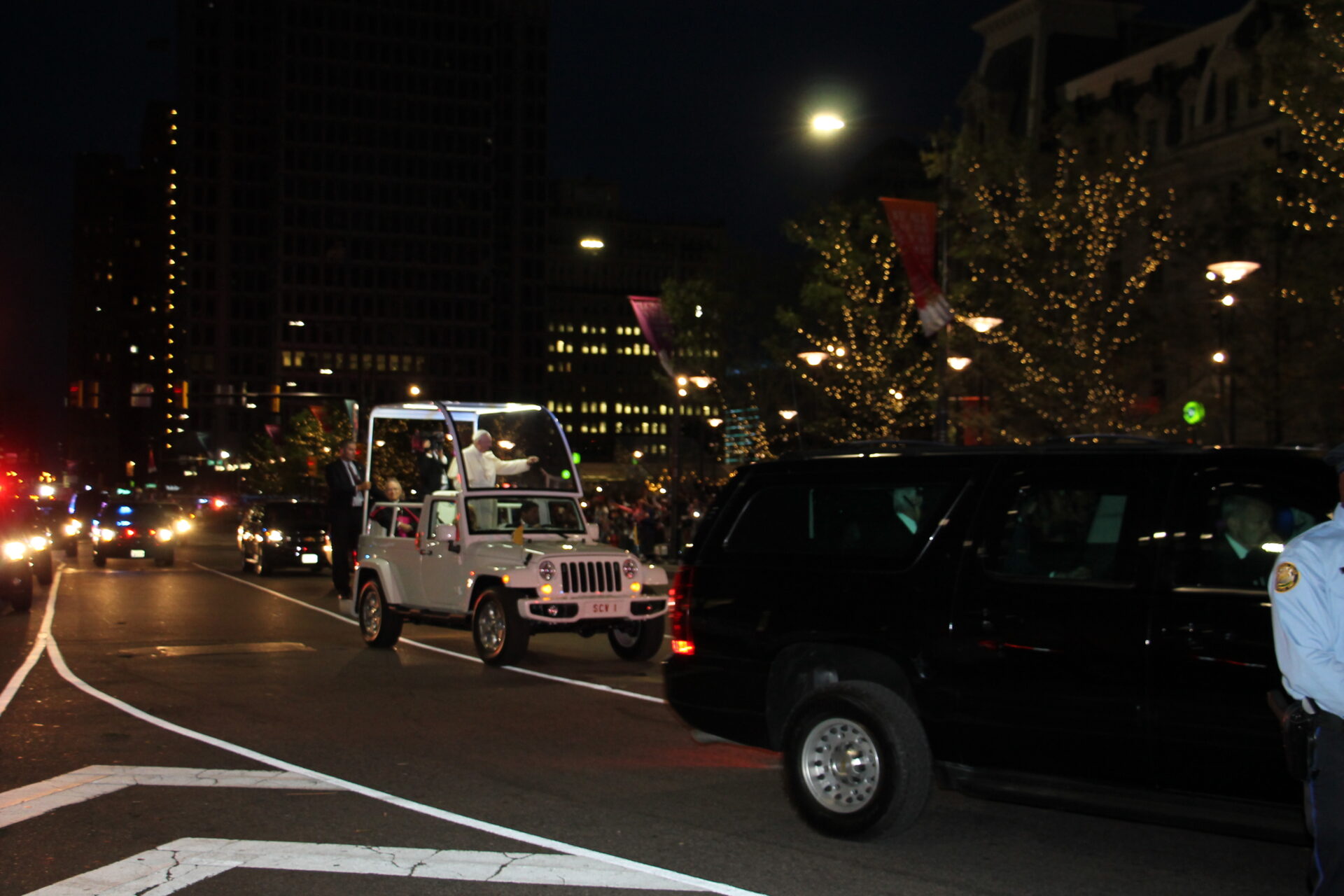 It was a 10-hour wait and worth every moment when we finally laid eyes on Pope Francis.

I had arrived much earlier in the day and found a spot alongside the fence where a cop told me the pope was sure to pass at some point. My friend Gina and I stood up against the perimeter for 10 solid hours along with people from all over the globe who had descended on Philadelphia for the World Meeting of Families. The mood was one of good cheer with many breaking into songs, sharing stories, jokes and taking “selfies.” As the sun faded, Gina and I began to shiver a bit, but I kept my camera slung around my neck, ready for the “money shot.” Just as we were beginning to wonder if Pope Francis’ route through the city had changed, a cheer went up and the motorcade approached.

People held up their cell phones and began snapping pictures. Others had young children on their shoulders or babies they held aloft. Many were waving gold and yellow Vatican flags and chanting “Pope Francis! Pope Francis!”

And then, just like that, he was in front of us in his “pope mobile.” We were laughing, tears spilling down our cheeks as this man who has ignited the faith among millions and even piqued the interest of atheists was before us for the briefest of moments. As we made our way back to the train station, we felt we’d taken part in an experience we will hold in our hearts for many years to come.

–Story and photos by Joyce Coronel

Wrangler News Staff
Previous articleLeaving room for Kyrene to succeed, or not, without fear of failing
Next articleKiwanis-affiliated teens support Courage to Care