Dancing her way to a dream

“A year ago I was petrified going into this—starting a new business and not having any idea whether it would work or not, or whether I would lose my shirt in the process,” recalls Mary Wall. “I anticipated huge losses the first year, and that didn’t happen.”) The longtime south Tempe resident launched Wall-2-Wall Dance Center as a place for teens and adults to combine their interest in dance and fitness, reminding all comers that it’s “Never-2-Late to learn to dance.” The studio is nestled between two motorcycle 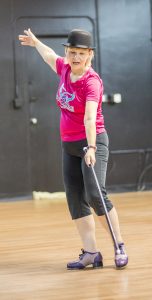 shops, and that suits Wall just fine. In fact, life as a small-time entrepreneur suits her just fine. “It is an incredible feeling,” said Wall, “that this is going to work; this is something I can do.” Starting a new business isn’t without its challenges, she knows. Wall had to figure out which classes would bring customers in, adjust class schedules and pricing, and figure out where advertising worked and where it didn’t. At first, she thought the wider variety of classes she offered the better, although she has found that her tap classes are most popular and has added more. Although initially she concentrated on marketing to ASU students (her studio is in north Tempe), she admits she misjudged her audience “I do really well with beginning middleaged or older people who have never danced before — that’s where the Never-2-Late classes come in, and they can take it slower,” said Wall. As to those who show an interest in classes, some have danced before, perhaps many years ago, but there are others who haven’t danced at all. One dance student said she wants to stay in Wall’s Tap 1 program “forever” because she doesn’t want to try anything harder, and Wall says that’s okay. “Some people try it for a few weeks and decide it’s not for them, but they are happy they had a place to try dance as an adult,” adds Wall. “I’ll advise new customers not to buy tap shoes at first—they can be expensive,” Wall said. “I let them try it in sneakers to get an idea of the coordination.” Another student who took her Never-2-Late class was blind, Wall recalls. “I would let her feel my leg, and I’d manipulate her foot in the direction it needed to go. She was just having a good time, and said it was a great form of exercise and a way to get out of the house,” Wall said. To start her business, Wall didn’t just tap across a dance floor. She had years of business experience under her belt when opportunity met determination last year. Wall studied theater arts, dance and singing in college, hoping to become an actress. It didn’t take long to realize that the odds of making a living as an actress were slim, so she took a job at the college box office and added theater management to her degree work. That experience led to a job at an 18,000-seat arena that was beginning to license the software for what would eventually become Ticketmaster. Wall accepted an offer to open a Ticketmaster office in Los Angeles, and her dream of being an actress was re-ignited, tied to the idea that she would now have a good day job while pursuing a career in acting. Wall’s dream was extinguished again after she met her husband-to-be, Scott, at Ticketmaster and they began traveling to set up Ticketmaster offices in NYC. After a few years, burned out on work travel and ready to settle down, the two married and settled in Tempe to start a family and raise two children. Wall recalls that her daughter, Teagan, now 25 and a doctoral student at California Institute of Technology, has enjoyed dance since she was 10 years old at Marilyn Bostic’s Ballet Center in The Lakes. Wall helped her friend Bostic develop the center’s tap program. Several years later Wall got a call from Mesa Community College to take over teaching tap classes for a teacher who had to leave before the end of the semester, and she’s been teaching there for 12 years. Teagan recalls her mom talking for years about wanting to have her own dance studio and ideas for how she would run it. When she had the opportunity to take over the lease for a dance studio that was going out of business in her current location, she knew she had to jump in with both tap shoes. “I talked about it for years and years, and thought, ‘OK, this is it. If I don’t do it now, I’m never doing it, I’ll never have this opportunity again.’ So we cashed in our investments to make this happen,” said Wall. Starting small at first, renovating one room of the studio dance floor, adding new mirrors, a few coats of paint, saving lots of money buying ASU surplus 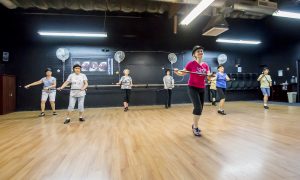 lobby chairs and a desk instead of new furnishing, and with encouragement from family and friends, Wall recently celebrated her successful 1-year business anniversary with dance students, friends and family—and cake and balloons. As any smart business woman would, Wall has sought the wisdom and advice of other successful business women, and she continues to adjust her business model to what works best. Whether it’s Fierce Funk, Hip Hop, Zumba or her increasingly popular tap classes, she says she’ll continue to bring in different teachers for variety and offer weekend workshops. Ultimately, she says, she wants her place to be a spot tap dancers from around the country think of when they’re in the area. Wall is now dancing her way into year two, reminding teens and adults that it’s never-2-late to learn to dance or pursue one’s dreams.