The Aztecs, expected to be one of the strongest teams in the state tournament in February, continued their dominance by winning the Moon Valley Invitational Dec. 22 and defeating their closest competitors, Camp Verde, by 53 points, Dobson by 111 points, Coconino by 125 points and Desert Vista by 129 points.
Corona, undefeated in Arizona meets, earned, as a team, 583 points despite not having entrants in the 182 and 286 pound weight classes. All together the Aztecs placed 11 out of 12 wrestlers competing in this tournament.
Four wrestlers earned Moon Valley Individual Championships: Glenn Farina in the 138 pound weight class, Zach Walton (145 pounds), Colton Winstead (152 pounds) and Ethan Tursini (160.pounds).
“Colton Winstead has really come into his own this year losing only one in-state match so far,” said coach Jim Martinez. “Although his success is not a surprise, his recent victories should help motivate him to work harder in practice to get prepared mentally because he could be a serious threat in the 152 pound weight class at state.”
Bridger Barker, at 170 pounds, lost his only match so far this season in an overtime decision to take second place at Moon Valley.
“Freshman Bridger Barker, with his strength, precision and determination, is quickly becoming a serious contender for the state tournament,” said Martinez. “Ethan Tursini, Bridger’s workout partner, has had a tremendously positive impact on his conditioning and technique development. Bridger’s opponents soon realize he is not only strong but prepared to grind, mistake free, for six minutes to win his matches.”
Other Aztecs who placed at Moon Valley include Matt Churchill (120 pounds) who placed third, Alex Carrillo (106 pounds) sixth, Brix Kronborg (195 pounds) sixth, Marc Farina (126 pounds) seventh and Kort Turner (132 pounds) and Josh Caliendo (220 pounds) each placed eighth.
Some of the Aztecs also competed out of state at The Clash in Rochester, MN, Dec. 28-31 where one wrestler was undefeated and two others did well.
“Junior Ethan Tursini went undefeated (6-0) at The Clash against some very good competition at 160 pounds,” said Martinez. “His record to date is 30-0 including solid wins at The Clash against top three ranked wrestlers in their respective state rankings. Ethan is wrestling like a man on a mission to leave no doubt who is the best wrestler in his weight class.”
“Zach Walton was 5-1 at The Clash and is 25-2 so far this season,” said Martinez. “After losing to Robbie Mathers in the 2012 State Championship, Zach has worked hard to gain some size, to go with his quickness and technique, in order to compete at 145 pounds.”
“Glenn Farina, who lost only two matches at The Clash, has posted a 24-4 record,” said Martinez. “He lost to the defending Minnesota state champion in a last-second reversal, and then to a two-time state champion from South Dakota.”
The Aztecs continued their undefeated season by defeating Perry in a dual meet Jan. 5, 44-21. Carrillo, Marc Farina and Ryan Spadafore (138 pounds) all earned six points each toward the team score by pinning their opponents.
Other Corona wrestlers who won their matches included Ryan Farina (113 pounds) and Michael Clare (182 pounds).
“One of the nicest surprises this season is the success of junior Michael Clare,” said Martinez. “He has a 17-4 record after his win against Jeff Arredondo of Perry whose only other losses were to Basha’s Trey Ronayne and Alex Bambic, the two-time defending state champion from Desert Vista.”
The Aztecs hoped to continue their undefeated winning streak at Mesa Jan. 9 before meeting Desert Vista at home Jan. 16. They are then scheduled to compete in the highly competitive Flowing Wells Tournament Jan. 18-19. After that tournament, the Aztecs have their last dual match at Hamilton on Jan. 24 before the Sectional Tournament Feb. 2

Corona Boys Basketball — Corona’s basketball team (11-2), currently ranked No. 1 by Maxpreps.com and No. 2, behind Mesa by the Republic, was tested at the Mesa Holiday Shootout playing against some highly competitive teams but emerged more confident in their ability to defend, play well together and compete against the best in-state teams the rest of the season.
The Aztecs defeated Canada’s Waterloo Collegiate Institute, Gilbert Christian, and Pinnacle, a team some consider to be a state champion contender, to face off against the only other team with a 3-0 record, Pacific Hills from the Las Angeles area , in the finals.
“I thought we played very well throughout the tournament, only losing to Pacific Hills, an extremely talented team out of California, 63-58,” said coach Sam Duane Jr. “Pacific Hills really challenged us with their athleticism and perimeter play but I still think we played well against them the first half before some fatigue set in during the second half.”
“Pacific hills should be as good of a team as any in-state team we will face the rest of the year.”
Junior Casey Benson was named the Most Outstanding Player of the Mesa Holiday Shootout even though Corona lost to Pacific Hills.
“Casey just was Casey, hitting his shots when open, hitting the open man when he was not,” said Duane. “He played solid defense and took care of the ball, made great decisions all tournament long, and shot the ball extremely well.”
“My teammates really played a huge part in me receiving this recognition,” said Benson. “I’m mostly happy we were able to improve our team chemistry and get better playing together as a unit
Sophomore Cassius Peat was named to the All-Tournament team as well.
“I think the key for Cassius’ success on the court is that he has gotten into basketball shape and adjusted more to the pace of the game after playing football during the fall,” said Duane. “He is much more active. When he is active offensively and on the boards, he can play at a high level.”
“Cassius really stepped up during the Mesa tournament giving us an inside presence,” said Corona guard Bryan Siefker. “It seemed as if whenever we needed an inside basket he delivered.”
Siefker, the team’s top defender, always finds a way to help his team on both the defensive and offensive end while Braden Tennyson made some big three’s for the team.
The team goal of winning out the rest of the regular season was still in tact Jan. 4 when they defeated Mountain Point at home 61-54. The Aztecs were scheduled to play at home against Desert Vista, always a highly competitive game both with the players and the fans, at home Jan. 8.
The Aztecs winning streak has a good chance of continuing since the only currently ranked Division I teams they are scheduled to play include No. 9 Dobson on Jan. 29 and No. 10 Marcos de Niza, Jan. 15 and Jan. 31, the rest of the regular season.
Marcos de Niza Boys Basketball
The Padres had a good holiday break as well defeating Phoenix Horizon 81-53 in the championship game to win the Horizon Holiday Hoops Invitational. Currently at 11-3, Marcos de Niza moved into the rankings at a No. 10 spot on the Arizona Republic’s rankings and No. 7 at Maxpreps.com.
Senior left-handed guard Richaud Gittens leads the Padres in several categories including points per game at 19 points. Other players contributing significantly to the team’s success include seniors Devin White, Stefan Tellis and Luke Lamb, juniors Dom Krane, Kelsey Trevino, Anthony Varela and Tyler Lazenby and sophomore Sean Wood.
The Padres appear to have a relatively easy schedule until they square off against Corona on Jan. 15 at home. They are then again scheduled Jan. 31, this time at Corona. Their final game should also be very competitive. They will play the currently No. 1 Arizona Republic ranked team, Mesa High School, at Mesa, Feb. 2.
Corona Girls Basketball
The Lady Aztecs went 3-2 at the Prescott Invitational defeating Copper Canyon 59-35, Paradise Valley 42-37 and Sabino 41-39.
“We were without three starters for this tournament but some other players embraced their new roles and stepped up including Ali Becker and Brenna Bjodvedt,” said coach Andrew Strom. “Taylor Kalmer, who averages close to 20 points a game, and Vicky Sanford also played very well.”
Upcoming games include a home game against Marcos de Niza on Jan. 15, away at Chandler Jan. 17 and at home against Mesquite Jan. 18.

Corona Girls Soccer — Corona’s girls soccer team made it all the way to the quarterfinals of the Arizona Showcase Soccer Tournament held over the winter break before losing to Desert Vista 2-0,
“We played a number of tight games but found ways to win against a pair of tough teams,” said coach Matt Smith. “We beat Sahuaro 2-1 when Steph Petre scored a game winner and then Paige Monroe kicked in the winning score to defeat Chaparral 1-0.”
“Liz Cheney and Maddie Wolf had exceptional tournaments on defense,”
Corona was scheduled to play Mesquite two times and O’Connor all at home before getting a chance for redemption against rival Desert Vista Jan. 10. Next the Lady Aztecs will face off against Dobson at home Jan. 15, Mesquite again Jan. 17 at Mesquite and then Mountain Pointe at home Jan. 18. 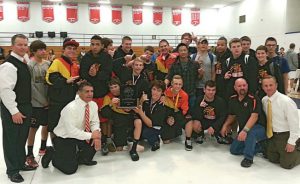