Kids who throw around those soft, plastic discs as part of a new intramural sports club can have all the fun they want, as long as they don’t call ‘em Frisbees.
Kyrene Community Education found that out when they started an intramural club that has been well received by students who are interested in sports as well as those who are not.
But USA Ultimate, which sanctions such collaborations, made it clear that trademark conventions prevent the use of the venerable disc’s name in an unsanctioned competitive activity, which is how the unfettered one-word name was born.
Ultimate, then, as it’s known in the context of a playground game, is defined as being “played by two teams with a flying disc or Frisbee on a field with end zones, similar to football” with the goal being to catch a pass in the opposing team’s end zone.
The club targets fourth- and fifth-grade students with an interest in team building and physical fitness.
At last count, approximately 150 students were enrolled in Ultimate, but Gavin Martin, the Kyrene district’s athletic director and manager of intramurals, hopes the turnout will continue to grow as kids play Ultimate at recess.
Martin said the program’s primary goal is to create a comfortable environment so as to attract to students of all skill levels.
“We started intramurals to provide activities after school for not only kids who are into club sports but also kids who don’t play sports but are interested,” Martin said.
“Some feel overwhelmed trying out for team sports,” he said, so the goal was to create an environment that was welcoming and fun.
Parent Alisa Van Oder said that her son, Jeremiah Bukovszky, was never previously interested in sports but joined Ultimate on a whim and loves it.
“[Jeremiah] was having a hard time putting himself out there but the teachers really encouraged him and taught him how to play,” Van Oder said.
She also said that the program has brought kids at the school closer together and gives them the opportunity to meet children from other schools and neighborhoods.
The Ultimate season consists of six weeks of practice, two times per week, at each school. At the end, all schools will compete in a round-robin tournament, scheduled Saturday, Dec. 8, at Aprende Middle School.
The program runs after school at 13 of the 19 Kyrene elementary schools, and will soon be offered at all.
For information about joining the program, students and parents should inquire at their respective elementary school. More information can be found at www.kyrene.org. 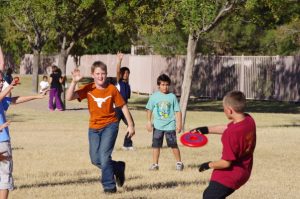