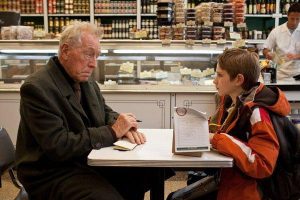 Despite the title, Extremely Loud and Incredibly Close is a mostly quiet movie, and for quite a while it keeps its emotional distance, too. The central character, Oskar Schell (Thomas Horn), the son of a Manhattan jeweler (Tom Hanks), speaks in a direct, declarative manner, even when, a couple of times, he raises his tone in anger.

He has plenty to be angry about. Oskar’s very smart and imaginative but obsessive, phobic, possibly Aspergers-afflicted. None of this gets any better after 9/11, on the morning of which his father is at a business meeting more than a hundred flights up in the World Trade Center. This, presumably, is the meaning of the title—how New Yorkers perceived the attacks. The loss leaves Oskar even more confused and secretive, and opens a gulf between him and his gentle, shattered mother (Sandra Bullock).

Oskar’s Dad would send him on fanciful “reconnaissance missions” in Central Park, designed in part to force him to interact with other people, in search of artifacts of a mythical Sixth Borough of New York City. About a year after what Oskar refers to as “The Worst Day,” the boy is snooping in his Dad’s closet, and he finds a key in a small envelope with the word “Black” written on it.

Taking this as a posthumous reconnaissance mission, this strange, wounded kid ventures out into his strange, wounded city. He starts spending his Saturdays pestering people named Black throughout the Five Boroughs, sure that if he can find the lock that this key fits, it will reveal a message from his father. Really, of course, he just wants to keep his connection to his beloved departed parent alive.

I must admit that it took a while for me to respond to Extremely Loud and Incredibly Close.  The film is directed with precision by Steven Daldry and beautifully shot by Chris Menges, and it features another lovely, urgent score by Alexander Desplat. There’s no shortage of fine acting, either. But for almost the first half, the script, by Eric Roth from the novel by Jonathan Safran Foer, seems precious and self-consciously whimsical.

It’s also a particularly single-minded exercise in that relentlessly pursued theme in the American narrative tradition, the Search for the Father. For all the excellence of young Horn’s performance, when the supposedly sweet-natured and sensitive Oskar ignores, even exacerbates his mother’s sufferings, it becomes hard to like him, fairly or not.

But about midpoint, a character enters the story known only as The Renter, who lives with Oskar’s grandmother (Zoe Caldwell) and can’t or won’t speak. He and Oskar take to each other, and he starts to accompany him on his Saturday quests, conversing only through cryptic scribbles in his notebook, or through the words “Yes” and “No” written in the palms of his hands.

The Renter is played by the great Max Von Sydow, and the odd, somber rapport that he and Horn find in their scenes together makes the movie start to click. It might be too much to say that Von Sydow, with his alert, wary face, saves the movie single-handedly. But he’s a big part of its salvation, and he does it without ever speaking a word.

By its final stretch, when mystery of the key was finally solved, and when Oskar’s own terrible secret was cathartically revealed, I was fully drawn into the movie.

Oskar’s flailing reaction to the tragedy becomes a proxy for his city’s, and his country’s, and if what he learns about himself and his neighbors is extremely heartbreaking, it’s also incredibly uplifting.