‘Hoodwinked Too!’ redux ready for girls (and boys, too) 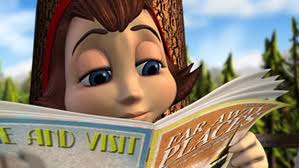 Made in a less-expensive, not-so-lush form of computer-generated animation, 2005’s Hoodwinked! was a fractured retelling of the Little Red Riding Hood myth. It was filled with wacky references to other fairy tales, something like Shrek but without the same effortless wit. The voice cast was good and the film certainly had its moments, but on the whole it felt second-tier.

Due in part to its modest budget, however, Hoodwinked! was nicely profitable, so sure enough, this spring a sequel arrived, about a year belated by Hollywood legal wrangling. It arrived on DVD on Aug. 16 and is also available now  from Netflix.

In Hoodwinked Too! Hood vs. Evil, the plucky young Red (voiced by Hayden Panettiere, replacing the original’s Anne Hathaway) must team up with the deadpan Big Bad Wolf (Patrick Warburton) in order to rescue Granny (Glenn Close), who’s been kidnapped by a masked, cackling witch (Joan Cusack).

Lots of other bizarre characters voiced by celebrities are woven into the complicated storyline, including Bill Hader and Amy Poehler as Hansel and Gretel; Brad Garrett as a Scorcese-style Giant; Wayne Newton as an anthropomorphic harp; Cheech and Chong as two of the Three Little Pigs; and Andy Dick as a Hannibal Lecter-ish bunny.

With actors like that riffing away diligently at their skewed lines, it’s inevitable that Hoodwinked Too! would have some funny moments. I liked Grier’s trash-talking, four-armed bridge troll; Warburton, with his slow, sardonic line readings, is always good for a few laughs.

Despite the cut-rate animation, the film isn’t without visual amusement, either, as in the Charles Addams-like look of Hansel and Gretel.

The trouble is that while the film tries hard, it tries too hard. It’s by no means awful, but it just doesn’t build up enough zany momentum, especially in its homestretch.

The director, Mike Disa, wrote a column for Huffington Post in which he described how proud he was, after spending a decade working for Disney Feature Animation, to make a movie for little girls in which the heroine isn’t a Princess looking for Her Prince. I wholeheartedly agree with his sentiments, and I think, on the whole, that little girls (and boys) will enjoy Hoodwinked Too! reasonably well. But positive gender roles do not, by themselves, a classic make.