Light rail: On track to a bright future 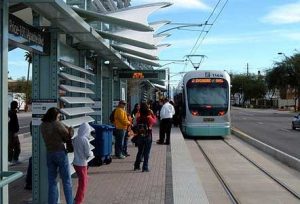 Despite a recent surge of transit cuts affecting bus routes throughout Tempe and Chandler, light rail is gliding toward a brighter future.

“This was required to understand the extension’s effect on its neighboring environment and to continue to compete for federal grant dollars.”

“When we evaluated this (project) we did see great value in a bus rapid transit on Rural Road,” Foose said. ‘This is still something we would really like to pursue, but funding is currently not in place for that program.”

Chandler residents currently can board bus rapid transit and  take it past the U.S. 60 to Main Street, where park-and-ride options are available.

In February, the Mesa light rail extension project was recommended to receive $38 million in the president’s budget for 2012, securing federal support for the transit system.

“We are continuing to move forward under the good assumption that we will get some level of support,” Foose said.

The $38 million is yet to be confirmed by Congress because the budget has not officially passed, Foose said.

“There’s just a lot of discussion happening at the federal level,” she said. “It’s all part of the budget and their grant programs.”

Foose said Metro officials are confident the project will continue to receive the federal support it needs to complete the Mesa extension.

Additionally, Foose said, the project capital cost of the extension is approximately $200 million, with about $80 million generated from Proposition 400 and $45 million from a federal grant supporting projects that positively impact air quality.

Residents can expect to see construction get under way next year.

“We expect to break ground with utility relocation next spring or summer – that’s really the first phase of the construction,” Foose said.

“We are nearing 60 percent of engineering the design.”

Construction is expected through 2015, with operations beginning in 2016.

Foose said there will most likely be slight adjustments to current bus routes once the extension is in operation.