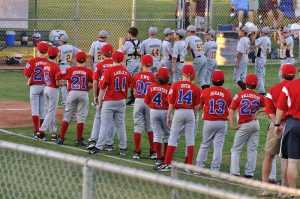 With a 12-4 victory over Chandler North, Tempe South Little League All-Star Baseball Team this season became the first 11-year-old team in the league’s history to win a regional title and advance to the state tournament.

Tempe South manager Scott Novic said the team remained focused through regionals and won the title by playing their best of the game of the year.

After losing to Ahwautukee in the regional finals a year ago, Tempe South set a goal to return to the regional title game –and this time win it.

“They set their goal,” Novic said. “The coaches and the kids both got to work. It was an interesting journey.”

With last year’s loss fresh in the player’s minds, Novic said, they returned this season more focused than ever. It resulted in Tempe South storming through the regular season, losing just one game.

Novic said the team focused on fundamentals and execution. He had never coached such a determined group of players.

“They set their minds to it. They worked hard and they achieved their goal,” he said. “They didn’t let failure get them down.

“The boys have higher expectations for themselves than the parents do. They wanted to do it.”

The team, Novic said, defeated their opponents by playing the game hard and smart. They also applied constant pressure by being aggressive at the plate and on the bases.

“Our mantra is ‘relentless.’ We wanted to be the most relentless team you would face,” Novic said. “Our goal was to have a fundamentally sound team. If you can (hit and catch the ball well), you can win some baseball games.”

The season was full of excitement and highlights. Novic said the season had plenty of signature plays. In the regional finals, Kevin Dunnahoo opened up the game with a home run to center field. It set the tone for the rest of the contest.

“He just unloaded on the ball,” Novic said.

There was also the time when Teddy Ladley had one of the hardest hits of the season. He was at the plate, took a strong swing and hit the ball so hard that it did something Novic had never seen before.

“He got it stuck in the fence,” he recalled. “It was unbelievable how hard he hit that ball.”

Novic said another great play this season was made by his son, Matthew. With runners on the corners, Matthew, who was playing catcher, made a big play by faking a throw to first base and zipping a throw to third base to tag out the runner.

“It was such an athletic play,” Novic said.

Players like Dunnahoo, Ladley, Matthew Novic, Eric Weidner and Noah Hirano were always focused and willing to work together to reach their goals.

Novic said that’s what he loved most about this year’s team. Tempe South had a desire to win that was second to none.

“I think that’s what made it a special team,” he said. “There was a sense of accomplishment that, with all that work and all that time, they pulled it off.”

It all started with a loss and ended with history. Novic said he will have many memories. His absolute favorite, he said, was the final out of the regional finals. It was there, he said, that his team realized that hard work does pay off and failure is not final.

“They just came (into the season) and said ‘We’re taking this and that’s it,’” he said. “They would not be denied and that’s what will stay with me.”