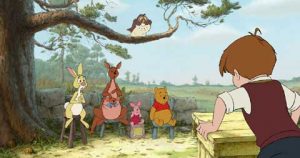 Opening this weekend is Winnie the Pooh, a new Disney feature chronicling the adventures of the title teddy bear and his various pals in the Hundred Acre Wood. I must admit that I come to the Disney incarnations of these characters with a bias. The low-key, quietly witty original stories, by A. A. Milne, and the simple original line drawings by E. H. Shepard, are among my earliest memories, and even as a child the Disney versions seemed like vulgarizations by comparison.

But the new film broke through my defenses. While still not close to Milne, it has a gentle charm, and it’s a visual delight, rendered in old-school “hand-drawn” animation. Best of all, it’s not in 3D!

The story involves Pooh, who’s just trying to find some honey, getting caught up the search for the downbeat donkey Eeyore’s missing tail, and later for his young friend Christopher Robin, who the animals come to believe has been abducted by a mysterious creature called a “Backsun.”

Actor Jim Cummings remarkably reproduces the voices of the late Sterling Hollaway and Paul Winchell, as Pooh and Tigger, respectively. Travis Oates isn’t quite able to do the same for the late John Fiedler as Piglet, though he gives it a good try. Craig Ferguson makes a fine pompous Owl, and the great John Cleese replaces Sebastian Cabot as the narrator—his voice is perfect for the part, but somehow I kept expecting him to lapse into Monty Python outrageousness.

At only an hour long, Winnie the Pooh is padded out with a cartoon short called The Ballad of Nessie, narrated in rhyme by the great Scottish comedian Billy Connolly, which gives an account of how the Loch Ness Monster came to inhabit her home. I liked this perhaps even more than the main feature.

Winnie the Pooh, is not, by the way, the only movie featuring cute little animals to choose from these days. Here are two others:

The main character’s name is Mr. Popper, and he has penguins. That, if memory serves, is about the extent to which the new film Mr. Popper’s Penguins is “based on” Florence and Richard Atwater’s 1938 children’s-book classic of the same name.

In the movie, Popper (Jim Carrey) is a high-powered New York businessman who lives in a sleek, spotless Manhattan apartment. He’s a divorced dad who had a distant relationship with his own father, a globetrotting fortune-hunter.

The old man’s legacy arrives, in crates: six smelly, rambunctious, destructive penguins. Popper is desperate to get rid of them, until his kids come over to visit and fall in love with them, and Popper sees that the birds can help him heal the rift with his family…

You get the idea; wackiness and warm-hearted family bonding ensue. Numbingly over-familiar as this template is, it’s a rather agreeable movie. The 8-year-old who joined me for the screening found the antics of the penguins, a mixture of real and computer-generated birds, to be sophisticated high comedy, and Carrey’s in good form here, poised and elegantly costumed. I also liked the black and white animated end titles, in which penguins cavort to “Ice Ice Baby.”

Then there’s Zookeeper. Kevin James plays the title character, the top beige-shirt at Boston’s Franklin Park menagerie. At the beginning, he gets dumped by his shallow pill of a girlfriend (Leslie Bibb), and mopes around about it for five years. Then he gets another shot at her. His pals the animals don’t want him to leave the zoo for a gig better suited to impressing the girl, so they decide to reveal their big secret to him: they can talk—in the voices of Cher, Adam Sandler, Don Rickles, Sylvester Stallone, Maya Rudolph, Nick Nolte—and they’re willing to coach him on how to court her successfully.

The wolf advises him, for instance, to mark his territory by urinating on it. The bears teach him to swagger and snort aggressively. The monkey keeps insisting that he should throw poop.

That, in much more detail than it deserves, is the premise of Zookeeper.  This movie is every bit as imbecilic as it sounds. I like James, with his fretful politeness, and while Zookeeper doesn’t serve him well, I liked him here too. Even so, Zookeeper is what the monkey throws.

“Winnie the Pooh” is rated G and plays at Harkins Arizona Mills, Chandler Fashion 20 and Tempe Marketplace; “Mr. Popper’s Penguins” and “Zookeeper” are both rated PG and play at Arizona Mills and other Kyrene Corridor-adjacent theaters.

Mark Moorehead
Previous articleDad, son share the adventure of a lifetime during A baseball odyssey
Next articleAt Chicago-style pizzeria the taste is worth the wait