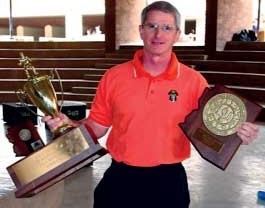 Former long-time Corona del Sol coach Dave Vibber has been named to the Arizona High School Athletic Coaches Hall of Fame. He will be inducted along with retired Corona football coach Gary Venturo at a May 1 induction ceremony and luncheon at Phoenix Elks Lodge.

“I was very proud to be selected,” said Vibber. “There are a lot of people in the Hall of Fame that I remember as a young coach in Arizona. It will be a great honor to be in their company.”

Vibber coached three sport—football, track and wrestling—for 30 years at Corona before retiring in 2009. Although his athletic teams at Corona won the 1980 state football championship and the 1982 state track and field championship, Vibber will most likely be remembered for his accomplishments with Corona’s wrestling program. He ranks eighth in Arizona history with 403 career wins in the sport.

Vibber is currently teaching P.E. full time at Madison Meadows Middle School in Phoenix, where he is also athletic director.

“I enjoy the change-up in my life as well as the different dynamics of the relationship I have with the students and my new fellow faculty members,” said Vibber. “I have no regrets about retiring from coaching, and I definitely treasure all the friendships I built with the staff and other coaches while at Corona.

“I feel so blessed to have been associated with such a great school as Corona. I marvel to this day at the hundreds of little connections I made while coming into contact with tons of great kids in wrestling, football and track,” said Vibber.

“The last couple of years at Corona, though, were a gift. They were the best in terms of records and accomplishments, and a good note to go out on.”