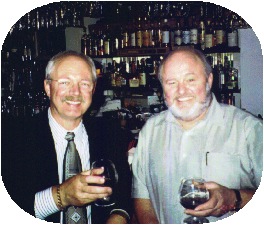 In his past 20-some years as the reigning monarch of south Tempe’s small but solidly established community of family owned restaurants,  Tony Romano has held court over an impressive domain of notables—sports figures, prominent business people, high-profile folks who represented a Who’s Who of the Valley’s most successful.

And though his name wasn’t always the first to come to mind in one of those categories, Neven Bajlo, the owner of John Henry’s, a stand-alone province of fine dining, was a longtime member of Romano’s core constituency of friends.

Thus, to Romano, the closing of John Henry’s earlier this month represented not only the departure of one of the Valley’s most revered restaurants but of a longtime friend, as well.

Romano and Bajlo have known each other from the time of the two owners’ nearly simultaneous arrival on the south Tempe restaurant scene—Romano offering fare focused on his family’s Italian roots, Bajlo creating a continental menu and a staff trained in the fine art of traditional European dining.

“We got along from day one,” said Romano of his friend Bajlo. But while Romano owns the building that houses his restaurant, Marcello’s Pasta Grill, in the Cobblestone Village center at Warner and McClintock, Bajlo leased the John Henry’s site from developer Michael Pollock, which created an added layer of complexity when the economy lost its luster.

“I don’t think Michael Pollock realized that (Neven’s) situation was that bad, or he would have tried to help,” said Romano. In fact, Pollock reportedly already had tried to make it possible for John Henry’s to stay in business by making various lease concessions. But Bajlo, seemingly not wanting charity, apparently never updated Pollock on the worsening conditions.

Bajlo’s departure, therefore, happened so suddenly that little could be done to keep the landmark restaurant open.

Even had Pollock had time and the inclination to help, the cost of making needed structural upgrades to John Henry’s might have been insurmountable. In the years since the restaurant’s opening, the once state-of-the-art exhaust system in the kitchen had fallen out of code, galvanized pipes had begun to leak, and other major repairs were said to be necessary, all at a cost potentially as high as $100,000 or more.

So despite the world-class appeal of a one-of-a-kind gathering spot, the unique quality of a distinctive menu, the allegiance of a longtime following, the seeming impenetrability of a nearly 20-year icon of the Valley’s restaurant scene—and the apparent willingness of a landlord’s altruistic nature—Neven Bajlo called it quits.

From Romano’s standpoint, the vacuum left by John Henry’s exit isn’t simply a matter of an iconic restaurant no longer being here. It’s a disappointing interruption to Neven Bajlo’s deep-seated generosity, which has ranged from lending money to those in need to donating many times over to local schools when he knew it would help.

When we say “interruption,” we’re convinced it’s the right word. Besides Romano, Bajlo retains a large and loyal cadre of friends, Romano among them, who surely won’t allow him to remain indefinitely off their radar or out of their minds.