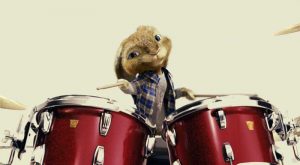 Much of last month I spent in China, where the Year of the Rabbit is in full swing. Cute little bunnies were in evidence everywhere—on billboards, buses, restaurants, shop windows and calendars. And it appears that we’re in for a taste of the same stateside, with the release of Universal’s Hop.

One of the heroes of Hop is E.B., a cute little talking rabbit. E.B., who’s the heir to the Easter Bunny mantle, runs away from his home on Easter Island—the equivalent of the North Pole for Santa—because he would rather be a rock drummer.

The other hero is a cute guy from California, Fred O’Hare, who’s unemployed but who, when fate tosses him together with E.B., decides he wouldn’t mind being the first human Easter Bunny.

That’s the peculiar premise of this kids’ movie, which mixes live-action with computer animation in the manner of 2007’s Alvin and the Chipmunks, with which it shares a director, Tim Hill. E.B. is voiced by the British comic Russell Brand, also playing the title role in the upcoming remake of Arthur, while Fred is played by chick-flick fave James Marsden, perhaps a bit of Easter eye-candy for the moms in the audience.

The plot of Hop is silly in the extreme, but it allows for plenty of hijinks involving cute fuzzy animals; there are cameos by David Hasselhoff and the Blind Boys of Alabama, and there’s some goofy visual imagination to the settings. The eight-year-old with whom I saw the film found it alternately mesmerizing and hilarious. There are a few mildly off-color gags that only the most uptight would be likely to find troubling.

And that’s pretty much all that need be said, I suppose, except…well, the movie reminded of how I felt about Disney’s The Lion King years ago. I left that movie wondering why it was so obvious that the lions should be the ruling class, and why Disney found it necessary to give “ethnic” voices to the hyenas that infiltrated the pride and started all the trouble.

I felt like a politically correct idiot raising this, but since The Lion King was an original piece of mythmaking, since it wasn’t avowedly based on some earlier book or legend, I wondered why those aristocratic, ethnically pure sympathies still had to be observed.

To a much, much milder degree, I felt the same way about Hop. The major antagonist is a chick, Carlos (voiced by Hank Azaria), who works in the Easter Bunny’s factory and who seethes with ambition to take over the candy delivery himself, rather than see it taken over by E.B.

When he suggests this, the retiring Easter Bunny (voiced by Hugh Laurie), laughs at the idea that anyone but a bunny could hold the job. Eventually, Carlos resorts to attempting a palace coup.

But I couldn’t help but wonder: Why couldn’t Carlos (a bird, after all) deliver eggs just as well as a bunny? I know, I know, it’s ridiculous, but I can’t help it, there’s something, well, classist, about the way the movie seems to endorse the idea that Carlos, with his thick Latin accent, is getting above himself. Especially since the movie eventually turns around and gives the gig to an upper-middle-class kid from Van Nuys.