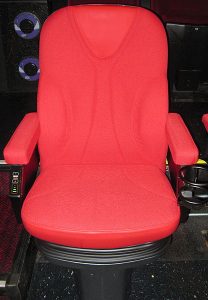 At this writing I still haven’t seen Harry Potter and the Receding Hairline, or whatever this one is called. But I did get to attend a demonstration of the latest technological marvel by which that film can be experienced, by 26 people per show in Scottsdale, that is.

The new UltraStar Cinema opened last month, a stone’s throw from the Kyrene Corridor in the shell of the old UA Pavilions at Indian Bend and the 101. It’s an all-digital multiplex with certain reserved-seating auditoriums limited to audiences 21 and older, VIP lounges for private parties, gourmet concessions and other such amenities.

In one of the auditoriums (not one of the age-exclusive ones), 26 seats feature “D-BOX enhanced motion chair technology.” Available for an upgrade fee, these seats, put simply, move you around in sync with the movie. They tilt and rock and rise and fall during chase scenes, register the impact of punches during fistfights, and so on. A control on one arm of the seats allows the intensity of the motion to be adjusted, or turned off, by the moviegoer.

By way of demonstration, we were shown a clip from The Polar Express, in which the train goes hurtling up and down a stretch of roller-coaster-like track, first with the motion seats on, and then with them off, to show how much is missing. I’m terrified by roller-coasters, and thought I might dislike this effect, but I liked it, and I can’t deny that the second time through, the experience seemed a little tame and sterile.

But UltraStar VP of Operations Damon Rubio, who introduced the system, was at pains to assure that D-BOX wasn’t intended to turns movies into two-hour thrill rides. He noted that the “Motion Artists” who create these tracks also work to create small, subtle effects, like the “hiccup” at the end of an elevator ride, that contribute to immersion in a moviegoing experience.

This was borne out by the second part of the demo: We were then shown the first ten minutes or so of The Expendables, the Sylvester Stallone actioner. The chairs shook at the gunshots and pummelings, of course, but cooler still was the moment when Stallone and pals, in a speedboat, pull up alongside a ship they’re raiding, and we faintly feel the rocking of the waves. Later, as they ride to their next adventure on an airplane, we feel the vibration of the droning engines.

The current Harry Potter flick is the first to offer the DBOX experience at Scottsdale UltraStar; Rubio says that the upcoming Tron: Legacy will be another. But there are also demonstration seats in the lobby which allow visitors to try it on for side. Obviously not everybody will like this, nor is it appropriate for every movie. But it strikes me as more than a gimmick, like William Castle’s notorious “Percepto” and “Emergo.” Or, if it is a gimmick, it’s a good gimmick.

I’m inclined to think that these non-visual, non-aural environmental enhancements could become a seriously-taken aspect of cinema art. I remember getting my mind blown when I went to Disneyworld in Florida as a ten-year-old, and took the rocket-ship ride, in which the seats sank to simulate the g-forces, and later drifted to simulate weightlessness.

More than ten years later, during a visit to Epcot Center with my then-girlfriend in the mid-80s, I saw the short film Captain EO. I can remember almost nothing about it, except how intensely it generated a sense of “being there” when Michael Jackson opened the hatch of his spaceship, and we in the audience felt a draft of cold clammy air from outside come right through the screen. It’s very clear to me that, if you can afford them, such techniques could be powerful addition to the cinematic bag of tricks.

At a grand opening party for UltraStar this week, I heard Diamondbacks great Luis Gonzales give a short speech of welcome to the place, which is just minutes from the new Diamondbacks/Rockies Spring Training Stadium. With startling candor, the slugger remarked: “…Don’t confuse DBOX with D-backs…If you’ve tried those seats, and if you’ve seen the D-backs the last couple of years…You’re going to want to be in the DBOX seats.”