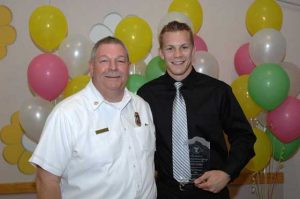 It’s Halloween 2009, and a woman has just run into the middle of a Tempe street, stopped a Fire Department paramedic truck, and called out frantically for help for a friend who is about to have a baby in her car.

Jesse Forbes, a volunteer EMT with the Tempe Fire Department, grabs an emergency kit and races to help the pregnant mother give birth.

“It was an amazing experience,” Forbes recalls. And, as it turned out, a life-changing one, as well.

From that moment on, he said, “I knew that was something I wanted to do.”

The 25-year-old graduate of Corona del Sol High School was recognized as Tempe’s 2010 Volunteer of the Year during the annual City Council Volunteer Recognition Event.

The recognition came as no surprise to those who know him. Forbes has spent the past year building a remarkable record of more than 2,000 hours as a fire department volunteer.

“It’s a great feeling,” he said. “It’s nice to be recognized when you’re working hard for something.”

In order to receive the Volunteer of the Year award, individuals must have been active Tempe volunteers in 2009, served at least 50 hours that year and be at least 18 years old, Bastin said.. Forbes’ initial volunteer work as a service aide included recovering valuable equipment and gear from fire scenes and hospitals, keeping vehicles cleaned and gassed, and stocking and delivering supplies, among other responsibilities, Bastin said.

His transition from newcomer to top volunteer came quickly.

“A few years ago, I just started riding along with Victor Garcia, the paramedic captain on Engine 7, because I had my days open between training hours,” Forbes said.

Forbes is currently under contract with the Ultimate Fighting Championship, or UFC, and fights full-time.

“Then, I found out the fire department was going to fill a position, so I told them I was on board,” he said.

Forbes said he took a semester-long class at Phoenix College to become an EMT before beginning his volunteer work. “I volunteered just to get face-time with the department, but it turned into much more,” Forbes said.

“I made a family there; everyone’s great friends.”

Forbes hopes to seek permanent employment as a firefighter, he said. He took his fire department written exam on May 19 and is waiting for the results. After being accepted into the department, potential firefighters go through an academy program lasting about 12 weeks.

Currently, Forbes is an intern at the Tempe fire center under Deputy Chief Greg Ruiz of the training department.

Forbes said he also played a large part in restoring the training center to create a better environment for drills.

While helping set up weekly drills, Forbes assists with radio traffic and actively participates in emergency calls to help fine-tune his EMT training.

“I’ve seen some real-life stuff happen in front of me,” Forbes said. “It’s been a growing-up experience.”

Other Tempe volunteers who were recognized include Edward Smith for his work on the African-American Advisory Board of the Tempe History Museum, and Jeanne Adam, who has volunteered for more than 20 years with the Tempe Volunteers in Policing program.