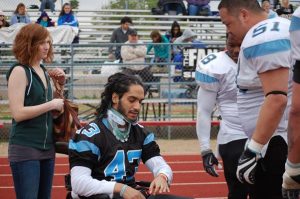 Khalile, 19, suffered a spinal chord injury on Jan. 16, just minutes into the opening game of the season for the adult amateur football league. Khalile had surgery to remove a damaged vertebra and is current undergoing physical therapy at St. Joseph’s medical center in Phoenix.

Although initially paralyzed, the surgery and rehab has helped the Corona del Sol graduate regain movement in all extremities and is able to feed himself.

“He’s doing really well,’’ says Copper Football League owner Ron Fennern. “Of course, he still has a long way to go, but he has the right attitude.’’

Fennern said the surgery cost $128,000 and the cost of Khalile’s rehab will probably double that figure, far exceeding the amount covered by the Khalile family’s insurance.

So far, the league has raised about $3,000 for Khalile. Fennern hopes the silent auction, which will be held during the league’s four scheduled games on March 27 will add significantly to that total. The games are scheduled at 10 a.m., 1 p.m., 3:30 p.m. and 6:30 p.m. Among the items up for bid are autographed footballs by Cardinals’ stars Kurt Warner and Larry Fitzgerald, along with goods and services provided by Valley businesses.

Fennern said friends and supporters who may not be able to attend the auction can make donations to the fund by visiting the league’s website at copperfootball.com and clicking on the Player Donation tab.

Because the league is a start-up enterprise with very little revenue, players must pay a fee to play and are responsible for their own insurance.

“Before the season, we had insurance representatives talk to all the players and offer them supplemental insurance policies, but very few take that option,’’ Fennern says. “The players are all in the late teens and early 20s. Maybe they think they are bullet proof. Even after Kareem’s injury, very few of the players have opted to take out policies, which we encourage them to do.’’

Khalile hopes to be released from the hospital in early April and will continue his rehab at his parents’ South Tempe home. He has been able to leave the hospital briefly, including a visit to a Copper League game in Marc

“It’s going to be a long road for Kareem,’’ Fennern says. “We are definitely standing beside him and we really hope the community will, too. I know Kareem and his parents are very thankful for the support they have received already. But they really need everyone to rally around them because the costs are going to be far beyond what they can manage.’’