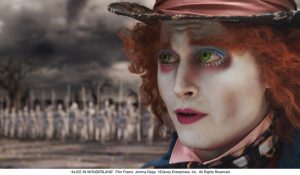 From the moment Alice (played by Mia Wasikowska) descends into the rabbit hole, all things that are the stuff of children’s imaginations and deepest fears are made possible, including talking flowers with human heads, “drink me” and “eat me” potions that make Alice big or small depending on what she needs, and opposing armies of evil red playing cards and chess-game pieces.

Of course, all the familiar story characters are present including the vaporizing Cheshire cat (voice talent by Stephen Frey), the vested Rabbit with watch in hand (voice talent by Michael Sheen), the evil red queen (played by Helena Bonham Carter) and the Mad Hatter (played by Johnny Depp).

What makes this adaptation of Alice in Wonderland different from any other is Burton’s signature visual style: a little dark, a little twisted, but as creative as Disney’s groundbreaking animated children’s classic “Fantasia.”

Burton borrows here and there from his earlier films like Charlie and the Chocolate Factory, Corpse Bride and Big Fish, then adds a little extra. He’s not satisfied with just the exaggerated features on talking plants or animals. He enjoys taking real actors on the set and making them stretch literally with the help of C.G.I.

For example, the Evil Red Queen has a huge, oversized head, the cruel Knave of Hearts (played by Crispin Glover) is super thin and tall and all of the courtiers have prosthetic-enhanced physical features that come off now and again. And, there are two strange looking, enormously fat twin boys almost attached at the hip. The only normal-looking person in the film is the White Queen (played by Anne Hathway), and she’s boring and uninspiring.

The story pits good against evil and begins with a grown-up Alice (now 19 years old) returning to Wonderland unintentionally after fleeing from a highly orchestrated arranged marriage proposal by a well healed young man with no passion or personality. You can’t blame this woman from wanting to climb into a hole.

Although the film takes place in the 19th century, Alice clearly is a 21st century career woman dressed in the last scene as a knight in shining armor decapitating a dragon and then accepting a position as full partner in an international mercantile corporation. Not quite the Alice you remember in the book you read when you were young. She does wear big, pretty dresses throughout the movie but they just seem to get in the way.

Most memorable scenes are those that make you laugh or smile, and there are plenty. When a long-necked pink ostrich croquet stick speaks, the words “so sorry” to the furry hedgehog curled up as a croquet ball just before being hit you laugh out loud because the apology is so sincere and absurd. Or, when a guilty looking frog, being cross examined by the evil queen suspected of eating one of her candies, can no longer contain his composure and finally exclaims “OK , I admit it, I ate it, but I couldn’t help it, I was hungry, don’t kill me I have a wife and two kids to feed.” And non-verbal scenes like nervous big fish shuffling across the floor on their tail fins serving food and unhappy monkeys holding up table tops are not to be missed.

While the final epic battle between good and evil lacks the exciting punch you might expect, any disappointment is counterbalanced by the superb acting by Mia Wasikowska and Johnny Depp.

Mia is neither timid nor intimidated by the other big names in this cast. She looks the part and plays a strong, willful and vigorous Alice willing to take chances by reminding herself “this is just a dream and I can’t be hurt.”

Depp’s character is a hybrid of prior characters he has played, like Willy Wonka and Jack Sparrow—odd, eccentric and swashbuckling when the need arises.  The only time his actions seem misguided are during a break-dance near the end of the film that is so out of place it almost breaks the spell.

On the other hand, no one in this film, including the director, is playing with a full deck, so what you see is what you get at this tea party.

Family Audiences:  A
Masterful 3-D adaptation of the classic children’s story populated with even more outrageous-looking characters than those in Lewis Carroll’s original book. Nothing objectionable. Rated PG for fantasy action/violence involving scary images and situations, and a smoking caterpillar.

General Audiences:  B
Appropriate for all ages, especially Johnny Depp followers who are mostly over the age of 18 and won’t be disappointed. And, finally, a breath of fresh air: no passing-gas humor in this kids film.