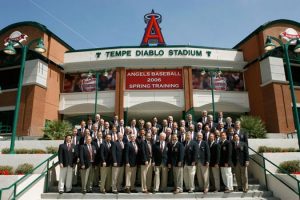 “We were preparing for a pretty big decrease,’’ said Scott Liem, a Diablo since 1981. “But it never happened. In fact, we were pleasantly surprised. It turned out our revenues were pretty much what they had been before.’’

Last year’s experience only confirmed what Liem had known all along.

“I guess it just served to show what a strong commitment the community has to spring training,’’ said Liem, who will complete his one-year term as Diablos president in May.

It is for that reason that Liem looks forward to the opening of the 2010 Cactus League with great optimism.

Unlike the other Cactus League games at Diablo Stadium, where proceeds are split between the Los Angeles Angels and the Diablos, all of the revenue will go to the Diablos.

To maximize the benefits, the Diablos are pulling out all the stops to give the game an Opening-Day feel.

“We’re inviting lots of the Little League teams and we’ll be making our presentation to the Boys & Girls Club before the first pitch,’’ Liem said. “The mayor and city council will be there. We’re doing everything we can think of to make this a community celebration.’’

“We provide funding for everything from pre-school to college scholarships and everything in between,’’ says Liem. “In all, we fund about 10 to 12 different programs.’’

More than two-thirds of that revenue comes from Cactus League, where Diablos run the concessions, gift shop and parking.

For the 55-year-old Liem, spring training has been part of his life for almost as long as he can remember.

His father, Don, was one of a handful of Tempe businessmen who organized the Diablos in 1968.

“Spring training has always been a big thing in my life,’’ says Liem, a lifelong Tempe resident.

“I can’t imagine not being part of it.’’

Slim Smith
Previous articleWhat’s in a name? At McCool’s it translates to good food, good music, good fun for the whole family
Next articleCity manager’s public budget forum due Feb. 24 in So. Tempe