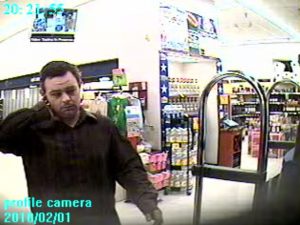 The Blue Basket Bandit is back.

After a six-month hiatus, the man who has stolen cosmetics from several East Valley Walgreen’s stores over the past 2 ½ years struck again, this time on Feb. 1 at the Walgreen’s location at 4949 West Chandler Blvd.

To date, the thief has stolen approximately $10,000 worth of cosmetics. The white male enters the Walgreen’s, picks up a blue shopping basket and proceeds to the cosmetics section where he removes various cosmetics by sweeping them into the basket with his arm.  He then removes a Walgreen’s plastic bag from his pocket and transfers the cosmetics from the basket to the bag.  The suspect then walks out the front without paying.

The suspect often changes his appearance and will use different vehicles for each theft, removing the license plate from the vehicle before committing the theft.

The Chandler Police Department is asking the public’s help in identifying the thief, who is described as a white male; about 5-foot-7 with a medium build and brown hair. In the most recent theft, he has some gray in his hair and appears to have lost weight.