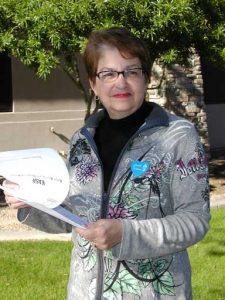 With time running short, two advocacy organizations have joined forces to increase understanding of an upcoming vote, passage of which would allow the Kyrene School District to exceed its operating budget by 10 percent annually.

The approved override would generate an estimated $12.4 million each year it is in effect.

Organizations that have launched the collaborative effort in support of the measure are Stand for Children and Yes Public Ed.

Members of both groups met last week at the home of Mitzi Epstein, who is with Yes Public Ed. Their goal: to select officers and lay out strategy.

Olga Vives, with Stand for Children, said the organization will help Yes Public Ed with volunteers and organizers for campaigns.

“(The groups) will work together,” Vives said. “The main issue, of course, is to develop a campaign so the voters know what they’re voting on, and also make sure the information is assimilated around the district once mail-in ballots get to people’s homes.”

The election is scheduled for Tuesday, March 9.

Vives said she believes STAND and Yes Public Ed can be very effective together.

“Because of the laws that are in place, (Yes Public Ed) can fundraise for the expenses of the campaign. They can engage in political activities, endorsements and things of that nature.

“It was important to have that arm of this campaign in place,” Vives said.

“I think it’s going to be a good combination of having (Yes Public Ed) out there in support of this override along with Stand for Children, trying to get parents and teachers to know what’s going on and how important it is that the voters approve this initiative for the kids in Kyrene.

“I think a lot of parents and people in the district are very concerned about the state of public education in Arizona and they’re worried about the cuts in funding, and they understand that if this override is not passed that it would be very detrimental to the Kyrene schools.”

Becky Simblinger, a member of Yes Public Ed, said an increase in school funding would create improvement on a number of fronts. She said the money could be spent on placing aides in kindergarten classes, adding technology and maintaining quality. Schools could also have smaller classes and more teachers.

“It’s better for the children. The teachers can spend more time with all the children,” Simblinger said.

“With smaller classes the teacher is able to work with the students more. They get more time with the teacher, which is always beneficial.”

Simblinger said several strategies aimed toward informing the public will be implemented in the coming days.

Word of mouth and representation at schools are also important, she added. Vives said enthusiasm for the promotion of education is growing in Arizona.

“I see a lot of interest, people wanting to know more and people reaching out to others so that they can go out and vote on this on March 9,” Vives said.

Kelly Pappala has spent 23 years as a teacher. She is also a mother whose children are educated in the Kyrene School District. She has recently become involved with STAND.

“I’m a teacher and a parent. I work with student teachers for (Northern Arizona University) in the Valley. I’m fully involved in education,” she said. “(Education is) vitally important for preparing future leaders.  (Working with STAND) is a wonderful opportunity to impact lives.”

After hearing a STAND representative speak at a council meeting, Pappala decided she wanted to become more involved.

“My youngest is going to (Aprende Middle School) next year. When (STAND) extended the opportunity to Aprende parents, I felt like that’s where I wanted to put a little bit more of my time and energy,” she said.

“I’m excited to work with the other members of the committee to support education in Kyrene.

“It’s a good opportunity to bring about change. I hope it makes a big impact on the community and bringing about some changes. There’s a good organized effort to make an impact on the future of Kyrene schools.”

Mail-in ballots will be in mailboxes by Feb. 11. With little time remaining, Vives said work has to be fast and effective.

“It’s not far away. We have a few weeks to get this geared up. This is why there’s an urgency on this,” she said.