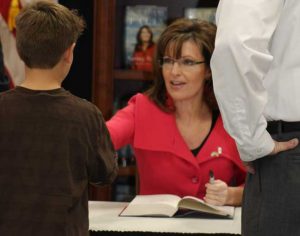 Chants of “Sarah! Sarah! Sarah!” filled the Costco in south Tempe as Sarah Palin strode into the center of the warehouse store wearing a rose-colored blazer, black high-heeled pumps and her signature spectacles.

She balanced a barefoot baby Trig on her left hip as Kid Rock blared through the sound system.

Palin is on tour to promote her new book, Going Rogue, which has sold more than a million copies. Hordes of fans and followers lined up as early as 8 a.m. Monday outside the store in hopes of meeting her and getting their books signed.

The stop at Costco on Elliot Road and Priest Avenue drew about 1,250 people by the time doors opened at 10 a.m., a store spokesperson said, and more arrived after that.

Close to 200 people were allowed inside before the store opened; the rest were in a line snaking around the back of the building past the receiving docks. Palin signed more than 1,000 books from about 10:40 a.m. to 2 p.m., another spokesperson said.

Rick DeMars of south Tempe arrived at 9:45 a.m., stopping “on a lark” instead of hitting the gym. He said he didn’t know why Palin would continue to bother with politics, but still wanted to see her run for president in 2012.

Drew Sweatte, a self-described “political junkie” from Palm Springs, Calif., was the first in line. He was celebrating his 23rd birthday on Tuesday.

“I’d call it the best day of my life, easily,” he said. “Nothing else compares.

“Most government is corrupt and takes away liberty from the people,” he added, but Palin is the one politician he would work for on staff.

Many people camped out at Costco overnight in folding chairs with blankets and hot coffee. Costco also provided water, hot drinks and snacks. Some in line read Palin’s book, fiddled with their BlackBerrys, did crossword puzzles or made new friends. Others wrote letters to soldiers in Iraq.

Mark Ang drove from his home in Los Angeles to see Palin, getting in line at noon on Monday. He compared the energy on the scene to a political rally.

“This is actually my third time meeting Sarah, and she remembered me, so I was really stoked,” he said. “I got her a Snuggie blanket.”

Tempe police cars blocked off Costco’s west entrance, and police officers and firefighters with walkie-talkies were an obvious presence inside and outside.

Not that there were any reports of trouble. Several people who were in line and who went through line complimented Costco for its organization.

The crowd was well-behaved, too, and in high spirits, eager to get even a glimpse of Palin. Photos weren’t allowed, but many lined up in the jeans aisles to peek through the black fabric partitions that were set up around the signing area. Many snapped shots with mobile phones and tiny cameras.

Palin sat at a table in what looked like a makeshift office, with bookshelves behind her (lined exclusively with copies of Going Rogue) flanked with U.S. and Arizona flags. Boxes of red, pink and white roses and carnations sat on the platform to the right and left of her.

Dawn-Cherie Kruse of Tempe was pleased with the experience.

“As fast as that was, she was so personable,” Kruse said of Palin. “She asked my name. She made sure to look at me.”

Several other were happy to express what they like about Palin as well.

“She’s an amazing woman; very confident in her convictions and beliefs, and I admire that in her as a leader,” said Daniel Stefanski of Glendale.

“You feel like you know her,” said Betty Sinclair of south Tempe. “I feel like I could go to Alaska and visit her.”