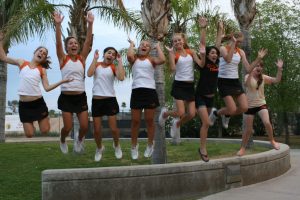 Corona del Sol athletes had a stellar 2008-09 season in their last year in the Central region before transitioning to compete in the East Valley region next fall.

“We were also the first public school in Arizona history to place both the boys and girls tennis teams in the state finals.”

The championship match went down to the wire with Corona’s Alexa Hay and Brittany Messer defeating Mountain Pointe’s doubles team 15-8, 5-15 and 15-10 when Hay executed a perfect drop shot for the winning point for a 5-4 win.

Corona had started off winning the first three singles matches to take a 3-0 lead when Amy Davis, Messer and Julie Simpson defeated Pride’s top three players. Resma Amin gave Corona at 4-2 lead when she was victorious at the No. 6 spot before the teams headed into doubles play. Hay and Messer got the point Corona needed to defeat Mountain Pointe 5-4 in the last match.

Katherine Cai, a member of the state championship badminton team, also had an astounding academic career at Corona. She was recently chosen as a recipient of one of Arizona’s 20 Flinn Scholarships, which include funding for four years of study, academic-focused travel abroad, mentorship by top faculty and other benefits worth more than $50,000 on top of her tuition.

Felton and Macchiaroli were named Co-MVPs, David Hoover received the Joe Sellah Award and Ortiz was voted by his teammates as most improved.

The Aztecs captured their first Central region championship title in years after defeating Desert Vista on April 28. CdS lost to Desert Vista in two early April games before getting on a roll to defeat the Thunder three straight games-twice in the state tournament.

Felton, infield, and Moore, outfield, were also named to the Class 5A baseball All-State first team while Giannonatti, utility, and Pellant, infield, were awarded honorable mention.

Pellant was selected June 11 in the 38th round of the MLB amateur draft by the Las Angeles Dodgers. He has signed a letter-of-intent to play at Marshall University in the fall.

5A State Finalists Girls Tennis – The Lady Aztec girls tennis team finished the season 17-2 garnering several awards on their way to a runner-up finish to Salpointe in the state 5A-1 team championships. Junior Kelly Lawson finished the season undefeated in both singles and doubles play and was named Central Region Player of the Year. Coach Carol Sandvig was named Central Region Coach of the Year.

Other members of the team that contributed to the Central Region Championship trophy, first place in the  All City Tournament and second place in the Metrocenter’s Kiwanis Invitational included Lauren Hacker, Danielle Hoyme, Kristen Ohe, Michelle Wellnitz and Libby Vogt.

Junior Kelsey Lawson was named high school girls tennis player of the year after leading the Lady Aztecs to a 5A-I state team runner-up finish and her first state single championship.  She is also ranked No. 1 in Southwest Section of the United State Tennis Association Girls 18.

5A State Finalists Boys Tennis – Corona’s boys tennis team made in into their first state championship team finals coming away with a runner-up banner for the Aztec gym after losing a hard-fought contest with ultimate team state champion Brophy. Garret Dunn, Corona’s No. 1 player, was a state finalist in the individual state tournament

In addition to being a state finalist, the Aztecs (18-1) won the Metrocenter Kiwanis Invitational and the All-City meet. They were crowned the Central Region Champions and coach Rick Wanta was named Central Region Coach of the Year.

The 2009 Central All-Region Tennis Team included Dunn, Alex Lawson, and Kyle Ogren as part of the First Team. Daniel Larsson was named to the Second Team and Honorable Mention went to Ben Duong and David Choi. Dunn and Ogren also received the tennis Tempe All-City Awards. Dunn for both singles and doubles while Ogren was given the doubles award.

Dunn, who received an academic and athletic scholarship to Iowa, was a National Merit Finalist and named one of Tempe’s Top Teens.

Central Region Champions Girls Golf – The Corona del Sol girls golf team accomplished all of the team’s goals for 2008 by winning the Central region tournament Oct. 20-21 at the Duke golf course and placing third in the state 5A-I state tournament. The Central region title was the first in over ten years.  Dana Finkelstein came in second and Kelsey Hoyt was fifth.

Girls Volleyball 08-09 Region Champions – The Lady Aztecs were crowned the Central region champions and entered the state 5A-I tournament seeded No. 1.They finished the season 42-9 overall and 11-0 at home after losing to Xavier Prep in the quarterfinals of the 5A-I state tournament.

“I ended up picking volleyball because I’ve played soccer ever since I was five years old and I was just a little worn out from it,” said Schroeder. “I’ve only played volleyball since the seventh grade and it’s still new and really exciting for me. I love soccer and will really miss it but volleyball is indoors and I just like the atmosphere better.”

Central Region Champions Boys Soccer – The Aztec boys soccer team (19-3) ended the regular season undefeated in the 12 contests which counted toward power points and was the No. 1 seed going into the state 5A tournament before falling to No. 16 Chandler. Regardless, they had an excellent season winning the Central Region title and garnering several individual player awards.

Allen, Bersano, Widjaja, Rusher, Von Allworden and Hoyt received the Tempe All-City Awards at the winter banquet. Allen was also named to the All-State first Team. Bersono was named Team MVP, Rusher was named Most Improved Player and Joey Cavaretta was awarded the Joe Selleh Award. Senior Matt Widjaja recently received a $500 from the Insight Bowl for his academic and athletic leadership at Corona.

Tempe All-City Awards were given to Kniffen, Schroeder and Weber. Senior Kniffen also received $500 from the Insight Bowl for her academic and athletic leadership at Corona.

Corona Football – The Aztecs finished the season with a 9-3 record after losing to No. 1 seeded Mesa Mountain View in the second round of the state playoffs. Running back Michael Lange was named Central Region Offensive Player of the Year and also received the Tempe All-City award for offense along with wide receiver Kirby Pellant, Michael Lange and offensive line Tyler Giannonatti.

Two senior football players, Reilly Sehl and Giannonatti, were awarded $300 Code of Honor Incentive Program (CHIPS) scholarships for their honorable and respectable behavior towards classmates, teachers and the CdS community.

Corona Softball – The Corona del Sol softball team finished the season 12-10 and ranked 11th in 5A-I power point rankings and the No. 11 seed in the state tournament. The Lady Aztecs lost to Salpointe in double elimination in the third round of the tournament.

Spring Tempe All-City Awards for softball went to Bohning and Alvarez for infield, Vallejos for catcher, Pollak for pitcher and Mary Spiel of outfield. Alvarez recently accepted a Division I athletic scholarship to Boise State University.

Ashley Hansen, a 2008 Corona graduate and a member of Stanford’s collegiate softball team, was recently selected to the 2009 National USA Softball team. She was also named 2009 Pac-10 Freshman of the Year and a top 25 finalist for the 2009 USA Softball’s Collegiate Player of the Year Award.

CdS Boys Basketball – The Aztec boys basketball team had a 14-11 record during the 2008-09 season winning the McClintock Holiday Shootout Tournament in early December. They entered the state 5A-I tournament for the sixth consecutive year under coach Sam Duane as the No. 16 seed but lost to the No. 1 seed Highland in the first round.

The Aztecs played competitive ball all season forcing seven teams into overtime games. In two of those games, they forced double overtimes eventually winning five out of the seven games.

Senior guards Devlin and Fox were presented with Tempe All-City Winter Awards and name as Honorable Mention in the All-Tribune boys basketball team. Fox will be playing at Oberlin College in Ohio.

CdS Girls Basketball –The Lady Aztecs had a new coach in 2008-09, Andy Strom, and finished the season 11-15 and did not make it into the state 5A-I tournament. The team played hard in practice and never gave up taking second place in the Blue division of the Nike tournament.

The team relied on the leadership and scoring ability of seniors Kim Pestalozzi and Nicole Coggins and the rebounding skills of twins Andrea and Alissa Beaird. Coggins was given the Tempe All-City Award for basketball and gave the invocation at the Tempe All-City Association banquet held April 13.

Corona Swimming and Diving Teams – The Corona Swim and Dive Teams finished the season coming in second for both the boys and the girls teams in the City Meet and fourth in the Mesa Relays. The teams qualified swimmers in 18 events in 5A-I state meet with 15 top 10 finishes. Brian Liu touched the wall first to become 100-yard backstroke state 5A-I champion and came in fourth in the 100-yard butterfly.

Corona Track and Field – Corona’s girls and boys track and field team had 257 athletes come out this season-the largest number in over 30 years. The athletes worked hard all season and continued to improve. The boys team took fourth place at the Aztec Invitational, first in the Basha Relays, third in the Tempe Relays, second in the Frosh/JV City Meet, second in the Varsity City Meet and second in the Central Region Meet.

Boys Volleyball – The Corona del Sol boys volleyball team finished the spring volleyball season with a 9-8 record and failed to qualify to play in the state tournament for the first time. Steven Law was recognized in the Central Region Second Team while Riley Heywood, Austin Peck, Tyler Liss and Alex Deem were given honorable mention. Law also received the Tempe All-City Award at the Tempe All-City Association spring sports banquet May 11 and was named honorable mention in the All-Arizona boys volleyball team.

Girl’s Lacrosse Coach Needed — Corona’s Lady Aztec Lacrosse Club is searching for a head coach for its 2009-10 girls high school club team. Individuals should apply who have prior playing or coaching experience at the high school or collegiate level. This position requires working closely with the other club coaches in developing practice plans but would not involve administrative or organizational responsibilities. The club is looking for someone who would also be as a positive role model for the players on the team. This is a paid-position with the stipend determined by experience. Please contact Cliff Prausa at 602-738-9377 or email tempelacrosse@aol.com to discuss this position or if you would like more information.