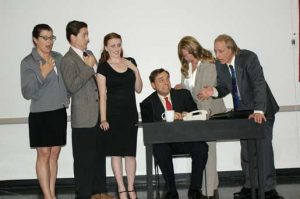 The musical comedy, which has its Valley premiere May 8 at Tempe Center for the Arts, centers on Tom, a “Porsche-racin’ skirt-chasin'” middle-aged ad exec who leaves his wife Lucy when he realizes that she’s cheating on him.

Incognito, Tom becomes the new roommate of Sebastian, the artist with whom Lucy’s been carrying on, then sets to work trying to sabotage the affair. But there’s one more thing about men that this show observes: Men bond.

The 2003 show, with music by Jimmy Roberts and book and lyrics by Joe DiPietro, was chosen for TLT’s season by the director, Paula Shulak, a fan DiPietro’s work.

“He just has such a feel for people,” says Shulak. “He’s best known for I Love You, You’re Perfect, Now Change. When I found out he had this other show that hadn’t caught on as much, though I think it’s better, I went to TLT and asked them if they’d do it, and they did.”

Hackman, an Iowa native who works at General Dynamics as a software engineer but has acted in dozens of Valley theatre productions over the last few years (he appeared in TLT’s recent production of Kiss Me, Kate) is having fun with The Thing About Men. “It’s a real cute show,” says Hackman, “though I don’t think it would be appropriate for pre-teen audiences. But for anyone over 11 or 12, it’s lighthearted and fun.”

But can Hackman, himself a married man, draw on his own experiences for the role of Tom?

He laughs hard at the question. “Oh, let me think…what’s the safe answer? No, no, no, this was quite a stretch for me.”

Tickets are $20 for adults, $18 for seniors and students.