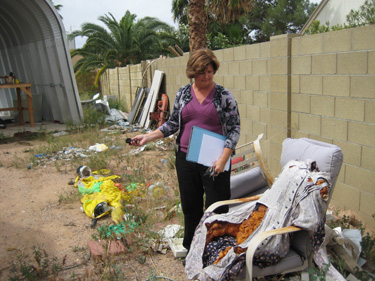 When you think of an occupation that might involve wandering into a crime scene or being threatened with violence, you think of a police officer, a detective, maybe a journalist. You probably don’t think of a Realtor.

Yet Realtor and property manager Tammy Billington has just such war stories, and she wants to do something about it.

“I’ve walked into houses where I’ve had knives pulled on me; I’ve had houses where I walked in to find double homicides,” says Billington, president of the local chapter of the National Association of Residential Property Managers.

“The problem is, now that the economy is harder, the crime rate is rising.”

In response to this, Billington and her colleagues are hosting a “Crime Free” seminar from 8 a.m. to 5 p.m. Monday, April 27, at the Remax Achievers office at 333 N. Dobson Road in Chandler.

Area attorney Denny Dobbins of the International Crime Free Association, Arizona Department of Real Estate Assistant Commissioner Janet Blair and Chandler Mayor Boyd Dunn, among other legal and law enforcement folk, will offer hints for property professionals and neighbors at this free event on how to both spot and prevent criminal activity connected to vacant or rental properties.

The first hour deals with drugs, the second with gang activity, the third with the role of Neighborhood Watch. The day-long event will also touch on such issues as vandalism, burglary, identity theft and crime safety.

While she hasn’t been chased away by a knife-wielding squatter, Billington’s Remax colleague Kris Cartwright has her own grim tales of real estate biz nightmares.

“I went into one house where people had taken the French doors off the back of the house,” Cartwright recalls.

“There were wood plank floors that they’d pried off with a crowbar, and they’d taken the bathroom fixtures. Anything they could sell, they’d taken.”

At a location near 48th Street and Baseline, says Cartwright, “They’d taken the copper plumbing from the attic. Somebody turned the water on for the house inspection and it flooded the attic. People are just breaking into these homes and taking whatever they can.”

“There’s been graffiti at a vacant bank-owned home at Chandler and McClintock.”

Occupied rental homes can have crime-related issues as well.

“I was showing a rental at Baseline and McClintock and the house looked like a whole family had been living in every room,” Cartwright says.

She also remembers taking clients to see another rental property in which “there were beds all over the house, in the dining room, in the living room, and there were people lying in bed. We just left.”

Cartwright offers her own tips to neighbors:

“If there’s a vacant house in your neighborhood, pick up the newspaper; if there’s a branch down, clear it. Mow the lawn if you want. Do anything you can to make the place look less vacant. If it goes to a bank sale, and you’re worried about it going for rock bottom, do what you can to make it look nice, because that affects everybody’s property values.”

The April 27 seminar is free, though seating is limited; call Tammy Billington at (602) 577-9330 if you’re interested in attending.

She states her ambition for the event simply:

“We could help lower the crime rate.”