U.S. capital, up close and personal 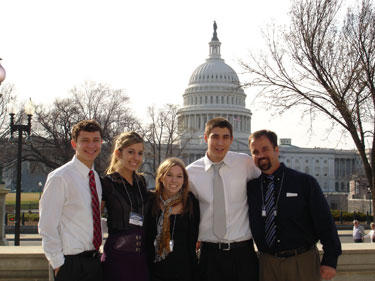 In life we all have our lists. Grocery lists. To-do lists. Get-organized lists. Recently I was able to cross an entry off my favorite list of all-the things-to-do-in-my-life list. I eliminated No. 17, go to Washington, D.C.

As a young man and high school student who has been learning social studies and government since third grade, visiting our nation’s capital was almost surreal.

Walking in the city made of marble not only let me get a grasp the history of our country first-hand but gave me a better understanding of how government functions today.

The visit was part of the annual gathering of the Close-Up Academy, which I attended with three Corona del Sol classmates during the academy’s March 15-20 session.

By choosing to participate in the Close-Up program, I not only had knowledgeable instructors to show us around the city, but also attended workshops, debates and a Capitol Hill simulation.

The amazing thing that Close-Up provided all of us was a chance to visit the offices of Arizona’s contingent of U.S. senators and representatives on our designated Capitol Hill Day.

Impressions of ‘the Hill’

When we set out on our Capitol Hill adventure, I never thought the “Hill” would operate the way it does: one meeting after another.

Our first meeting was with the staff in Sen. John McCain’s office. In my excitement over the possibility of shaking hands with our state’s senator and former presidential hopeful, I almost missed a chance to meet Mayor Phil Gordon of Phoenix, who was waiting behind us in the security line.

After talking with the mayor and thanking him for taking time to talk to us, we continued on to McCain’s office.

Once there, a representative greeted us and explained how a Senate office functions. After answering our questions about working in a Senate office, she informed us that both Sens. McCain and Kyle had a previously scheduled meeting that morning with the mayors of Arizona, who also were visiting Washington.

Leaving the Russell Senate Building, the location of Sen. McCain’s office, we headed to the Hart Senate Building for our meeting with Sen. Kyle’s staff. There we met with two legislative aides who told us about the operations of Sen. Kyle’s office. (Note: Senate offices differ from one another and can function altogether differently from each other.)

Rep. Harry Mitchell’s office was more memorable than the senators’ offices because of the personable welcome we received from his office’s employees. Unfortunately, due the apparently characteristic chaos of Washington and our miscued timing, we missed meeting with Mitchell by five minutes; he had just run off to the Capitol to vote.

The meeting and tours of the offices of our public officials were interesting, but the history entrenched in the city is what makes it so special.

Walking around the Thomas Jefferson Memorial, watching my breath in cold air, I felt goose bumps-not from the frigid temperatures but from the history and sacrifice brought to mind by the memorial.

The Abraham Lincoln Memorial, along with the Korean Conflict and Vietnam War memorials on each side, were somber reminders of the sacrifice and triumph that the soldiers of our country gave to protect our freedoms.

The city of Washington, D.C., offers Americans, both young and old, the ability to experience democracy first hand. From viewing Senate and House votes from the gallery in the Capitol Building to visiting memorials and monuments, Washington, D.C., is a place where history and present converge to create a place of singular wonders.

I highly recommend that all high school students-for that matter, all Americans-take a trip to the nation’s capital.

For its part, the Close-Up Academy offers great opportunities and learning experiences that will remain with me for a lifetime.

Now that No. 17 is accomplished, maybe I can focus my attention on the other components of my life’s to-do list. I’m not sure which one I’ll tackle next-maybe, on my 18th birthday, No. 22, skydiving.